Long essay on Mahatma Gandhi in English For Students of classes 7, 8, 9, 10, 11, 12 and also Competitive exam aspirants.

Essay on Mahatma Gandhi – Mohandas Karamchand Gandhi, called Mahatma, is the father of our nation. He was born on 2 October 1869 at Porbandar in Gujarat. His birthday on 2nd October is observed worldwide as the international day of non-violence. He belonged to a well-to-do family, his father being attached to the royal court of Rajkot. He was not quite good at studies but he took great care of his character.

His father Karamchand Uttamchand Gandhi was Chief Minister (Diwan) of Porbander. Harilal, Manilal, Ramdas, and Devdas were Gandhiji’s four sons. Mahatma Gandhi was one of the great leaders of the Indian Independence movement against British rule. Gandhiji inspired civil rights and freedom movements across the world.

Mohandas Karamchand Gandhi or Mahatma Gandhi was an Indian lawyer, active politician, and freedom fighter. He was the greatest freedom fighter who has proved to the world that the greatest of battles could be fought and won by applying peaceful methods.

At the age of 14, he married Kasturba Gandhi. Later he went to England to study law. The traditional Brahmins created a lot of hindrances in his way as they considered crossing the seas to be against the religious tenets. In England, Gandhiji found great difficulty in getting vegetarian food, but at last, he was able to locate a restaurant that served such food.

Mahatma Gandhi did law in England and returned to India as a barrister in 1891. He started practice at Rajkot and Bombay but failed. He was a young man of shy nature and it is said that when he appeared before the judge for the first time in order to plead for a case, he could not utter a single word.

Mahatma Gandhi went to South Africa in 1893 in connection with a case. There he was the miserable condition of the Indians and other black people. He set up the Phoenix Ashram there and formed the Natal Indian Congress in 1986. He opposed the white African policy of Apartheid tooth and nail and had his first experience of the practice of Satyagrah. He fought for social reforms, economic reforms and justice, and fair and equitable treatment. He taught the Indians the lessons of truthfulness, love, co-operation, fearlessness, and cleanliness. He started a weekly, Indian opinion in 1904.

Gandhiji experimented with the weapon Satyagraha for the first time in South Africa in September 1906 to protest against the Asiatic Ordinance issued against the Indian in Transval. Gandhiji’s first imprisonment was in 1908 at Johannesburg in South Africa.

In 1899 during the Boer war, Gandhiji organized Indian Ambulance Crops for the British. He was humiliated and ousted from Peter Marits Burg Railway Station in South Africa. He started Tolstoy Farm in South Africa in 1910 and Foenix Settlement in Durban.

Mahatma Gandhi was greatly influenced in his ideas such as Satyagraha, civil disobedience, and passive resistance by the Great Russian Philosopher and writer Leo Tolstoy. He had gained a lot of experience in South Africa and when he returned to India in 1915, he was fully equipped for the job he was to undertake. January 9 is observed as ‘Pravasi Bharatiya Diwas’ to commemorate this.

At that time there was a great influence of Gopal Krishna Gokhale and Bal Gangadhar Tilak on Indian politics. Mahatma Gandhi influenced by both, though he actually evolved his own ideology and strategy. Still, his real mentor was Gopal Krishna Gokhale whole he is said to have given the title “Mahatma” which actually stuck to his own name instead of that of his mentor.

Mahatma Gandhi was greatly influenced by Indian epics, the Ramayana and the Mahabharata, and loved to read the Gita, an English translation of which had actually changed his life.

Gandhiji started the first movement against British rule in 1917 at Champaran fighting for the rights of farmers growing Indigo; it was named Champaran Satyagraha. This was the beginning of the use of the Satyagraha as a mighty weapon which was to show its miraculous powers in years to come. It was during this movement that Vallabhbhai Patel who was at the forefront of the movement, got the title of “Sardar” from Gandhiji.

Mahatma Gandhi abandoned his title Kaiser-i-Hind in protest against Jallianwalabagh Massacre(1919). Gandhiji’s first national movement was organized against the Rowlatt Act in 1919. He launched the Non-Cooperation movement on 1 August 1920 which caused the violent incident at Chauri Chaura in UP. This incident initiated Gandhiji to suspend the movement in 1922. The only Congress session presided over Gandhiji was the one held at Belgaum in 1924.

One of the most important movements started by Mahatma Gandhi was the famous Dandi March which was started on 12 March 1930 to get Indians the rights of making salt from the seawater. The violation of the Salt Law by Gandhiji and his companions by making salt at Dandi near Gujarat sea-coast led to his arrest on 5th May 1930. But, this simple act of Gandhiji aroused Indian masses from their slumber, and henceforward, they were not afraid of violating any British law which was not based on truth, justice, and equity.

The famous Dandi March was the crux of the Civil Disobedience Movement started by Mahatma Gandhi and when on 5 March 1931, a pact known as the “Gandhiji-Irwin Pact” was signed, Gandhiji is said to have mischievously brought out a pinch of salt from the packet to be mixed in his tea saying, “It is from Dandi”.

Gandhiji participated in the Second Round Table Conference in London in August 1931. With the aim of eradicating untouchability Gandhiji founded the All India Harijan Samaj in 1932. He started his journey for Harijan upliftment from the Wardha Ashram in Maharashtra. The Wardha scheme of education was the basic education policy formulated by Gandhiji. 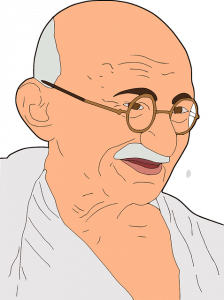 Mahatma Gandhi started Individual Satyagraha in 1940 and selected Vinoba Bhave and Nehru for that. He also started the Quit India Movement on 8th August 1942 and gave the call ‘Do or Die’. Almost all the Congress leaders who mattered were arrested and put behind the bars. The workers and employees struck work in factories and offices and students absented themselves from attending schools and colleges. The shopkeepers closed their shutters. As aftermath, through never desired or intended by Gandhiji, there were signs of revolt in the army and if earlier there had been the Gadar Party and martyrdom of Bhagat Singh and others, now the Indian National Army led by Subhash Chandra Bose and others, became a reality.

Gandhiji was assassinated by Nathuram Vinayak Godse on 30 January 1948 at the Birla House in Delhi. He died at 5:17 pm. His last word was ‘He Ram, He Ram’. Nathuram Godse used an Italian Beritta Pistol to shoot at Gandhiji.

Mahatma Gandhi’s grandson Tushar Gandhi led the second Dandi March from March 12-April 17, 2005 on the 75th anniversary of Dandi March. Gandhiji’s autobiography “My Experiments with Truth” was written in 1922 while he was in Jail. It describes his life from 1869 to 1921. It was translated into English by Mahadev Desai.

The fact is that Gandhiji was not just a political leader. His approach was holistic and his views were there in all fields of life. He was as much a political leader as a spiritual and religious seer and social reformer. Even his views on such matters as education, health, economy, morality, nationalism, internationalism, the welfare of the youth, children, and women, etc. cannot be easily brushed aside.

One of the great dreams of Gandhiji was the establishment of Grama Swaraj. Gandhiji said, “ India lives in villages”. Mahatma Gandhi started Sewagram Ashram on 30 April 1936. He said Non-violence is not one form it is the only form of direct action. He also said Truth and Non-violence are my Gods and Untouchability is a crime against God and mankind. We all must take active participation in celebrating Gandhi Jayanti to remember his teaching and beliefs.

Let’s start the Mahatma Gandhi essay in English for students of class 4, 5, 6

Mahatma Gandhi Essay – Mohan Das Karamchand Gandhi was born on 2 October 1869 in Porbander in Gujarat. He belonged to a well-to-do family, his father being attached to the royal court at Rajkot. He is the greatest leader that India has ever produced.

Mahatma Gandhi was sent to school at the age of seven. He was not quite good at studies but he took great care of his character. In this, his mother played a crucial role in his life.

Mahatma Gandhi has completed his matriculation in 1888 and went to England for higher studies. Gandhiji did law in England and returned to India as a barrister in 1891. He started to practice at Rajkot and Bombay but failed. He was a young man of shy nature and it is said that when he appeared before the judge for the first time in order to plead for a case, he could not utter a single word.

Mahatma Gandhi’s first important confrontation with the British Government came at Champaran in Bihar in 1917 when he raised his voice to demand the cessation of exploitation of cultivators and planters of that place.

One great aspect of Gandhiji’s personality was his broad humanity. He was a genuine lover of man as much as of God and spiritual aspects of life. He was greatly influenced by the Indian epics, the Ramayana and Mahabharata, and loved to read the Gita, an English translation of which had actually changed his life.

Mahatma Gandhi was assassinated on 30th January 1948, but his theories of truth, non-violence, and supremacy of means over ends cannot be lost sight of.