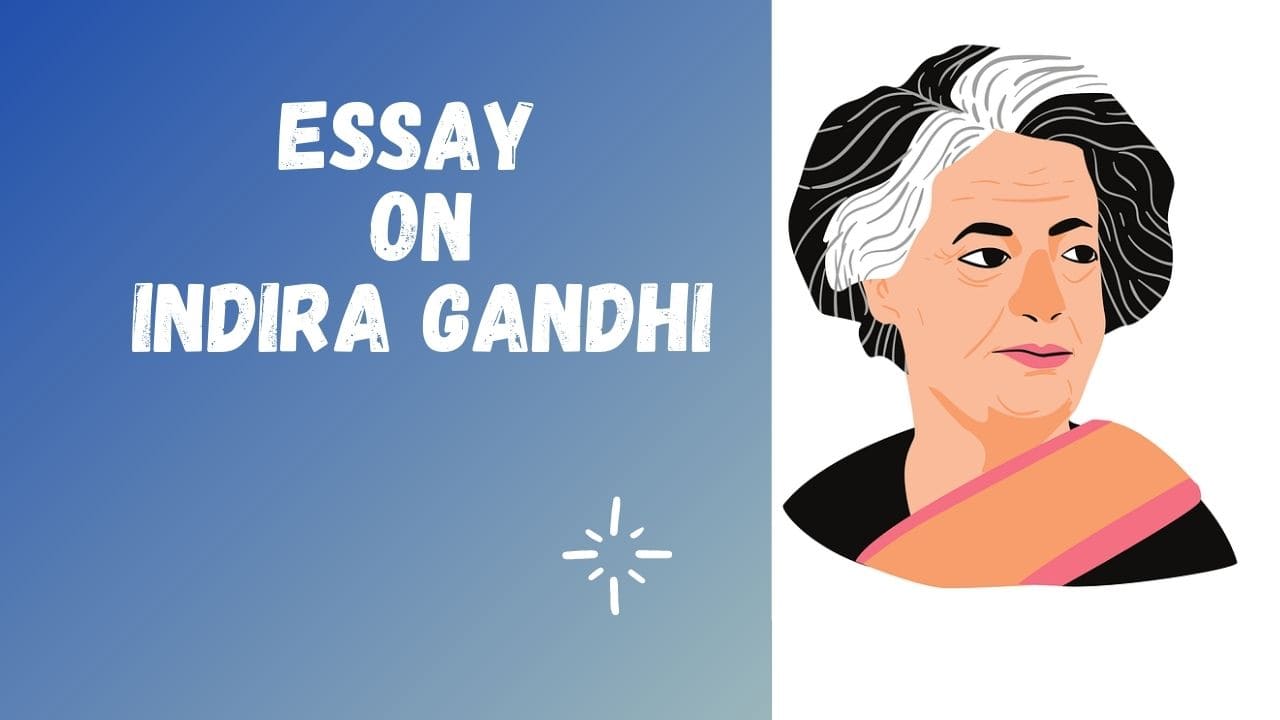 Essay on Indira Gandhi in English for Students and Children

This long essay on Indira Gandhi in English is suitable for students of classes 5, 6, 7, 8, 9 and 10, 11, 12, and also for competitive exam aspirants. Read and enjoy the complete essay about Indira Gandhi.

Indira Gandhi was born on 19 November 1917 at Anand Bhawan, Allahabad (Prayagraj).She was the illustrious daughter of the renowned Indian leader and freedom fighter, Pandit Jawahar Lal Nehru who became the first Prime Minister of India after she gained freedom on 15th August 1947. Her mother’s name was Kamala Nehru.

Indira Gandhi was born during a period of great political upheavals and her childhood was spent in a period of turmoil. her grandfather Pandit Motilal Nehru was an affluent lawyer. Thus, it can be said of her as it is said of Jawaharlal Nehru that she was born with a silver spoon in her mouth.

At that time, Anand Bhawan at Allahabad was the hub of all political activities in India. It was the central Place to meet for great Indian National Congress leaders. Even Mahatma Gandhi often stayed here.

Indira Gandhi got her primary education in Allahabad. After this, she lived in Poona from the years 1931 to 1933 and completed her high school education. After this, she was sent to Shanti Niketan to study with Rabindranath Thakur, where she remained until 1934-35.

While living there, she studied Manipuri dance and left his studies incomplete due to his mother’s illness and she had to go to Switzerland for his service and care in the year 1935-36. Later, she also studied in Switzerland and at Oxford in England.

When Indira Gandhi returned from Switzerland, she expressed the desire to marry Feroze Gandhi. Feroze Gandhi was at that time the Editor of the National Herald, a newspaper having a good reading public then, and he rose to be a second Congress leader letter. She married Feroze Gandhi on 26 March 1942.

Indira Gandhi got the full benefit of being active in politics since childhood and emerged as one of the country’s most powerful leaders. After India’s independence on August 15, 1947, his father Pandit Jawaharlal Nehru became the first Prime Minister of the country. During this time Indira Gandhi supported her father as an active worker of the Congress.

During her prime ministership, she faced many problems but with her firm intention, courage, and patience, she faced every problem firmly. Famine problem of 1966, presidential election 1969, or general election of 1971 – Indira Gandhi faced all the crises and succeeded in them. Indira showed her ability and courage by creating Bangladesh after the severe defeat of Pakistan in the 1971 war.

Without worrying about the world’s big nations, on May 18, 1974, she conducted the country’s first successful nuclear test at a place called Pokharan in Rajasthan. After this, she faced opposition from many countries of the world, but no opposition could be an obstacle in her intention.

Later, in 1975, Indira Gandhi had to impose an internal emergency, which many political thinkers and especially ordinary people thought of and still consider to be a major mistake. At first, it seemed that the situation would improve with the introduction of an internal emergency.

Even some enlightened people, intellectuals, and others praised the Emergency. Vinoba Bhave called it a “discipline festival” (Anushasan Parva), but, as soon as there emerged misuse and abuse of emergency by police and bureaucrats came to the fore, the emergency came to be considered disgusting. Thousands of political leaders of opposing parties were put behind bars and life became difficult for the common man.

One of the most enlightened and respected political leaders of the time, Jai Prakash Narayan launched a peaceful but vigorous movement against Indira Gandhi, and within a short period of time, the public felt a sense of hatred towards his government. The result was that she lost the election in 1977 and formed the Janata Party government at the Center.

In fact, the Allahabad High Court’s decision in one case went against him. Soon, infighting broke out in the Janata Party and people soon got fed up with it. The result was that Indira Gandhi again came to power in the 1980 election.

Became the Prime Minister of this Second Term, she gave the slogan of “Garibi Hatao”. On the morning of 23 June 1980, Indira Gandhi Ji received the sad news of the death of her young son Sanjay Gandhi in a plane crash that shook her heart. After the premature death of Sanjay, she put his eldest son Rajiv Gandhi in the service of the country.

One of the most remarkable achievements of India during the period of Indira Gandhi is the commissioning of the Indian National Satellite (INSA) system in 1983. On April 17, 1983, that the Rohini Satellite was launched in space with the SLV-III vehicle. Later, INSAT-1B was launched on February 1, 1984. Since then India has sent several spacecraft in space, which has helped in matters such as weather monitoring, TV, Computer connectivity, telecommunications, land and water resources, drought monitoring, flood mapping, etc.

Fourteen important banks were nationalized during his rule and the first Pay Commission was set up to determine the manner of pay scales and allowances of central government employees. During his period, India also made impressive growth in agriculture, industry, etc.

A great Indian and World leader as Indira Gandhi was, she had to pay with her life when she fell a victim to the bullets of her own security guard on October 31, 1984.

She was killed because of Operation Blue Star, which was run by her in the Golden Temple. Shortly before her death, in a meeting in Orissa, she said – Even if I died for the country, I would be proud and I am confident that one strand of my blood will strengthen the country.

Even though she may not be physically among us today, but his works are still guiding the country, that’s why people sing in his memory, “Jab Tak Suraj Chand Rahega, Indira Tera Naam Rahega“.

Indira Gandhi was a great humanist and environmentalist and her speech in Stockholm delivered to safeguard the world environment will never be forgotten by lovers of mankind.

Q1. What is the full name of Indira Gandhi?

The full name of Indira Gandhi is Indira Priyadarshini Gandhi.

Q2. Who was Indira Gandhi Killed?

A great Indian and World leader as Indira Gandhi was, she had to pay with her life when she fell a victim to the bullets of her own security guard on October 31, 1984.

Q3. Why did Indira Gandhi declare an emergency?

The final decision to impose an emergency was proposed by Indira Gandhi, agreed upon by the president of India, and thereafter ratified by the cabinet and the parliament, based on the rationale that there were imminent internal and external threats to the Indian state.

If you read this essay “essay on Indira Gandhi in English. Some important article is given below: