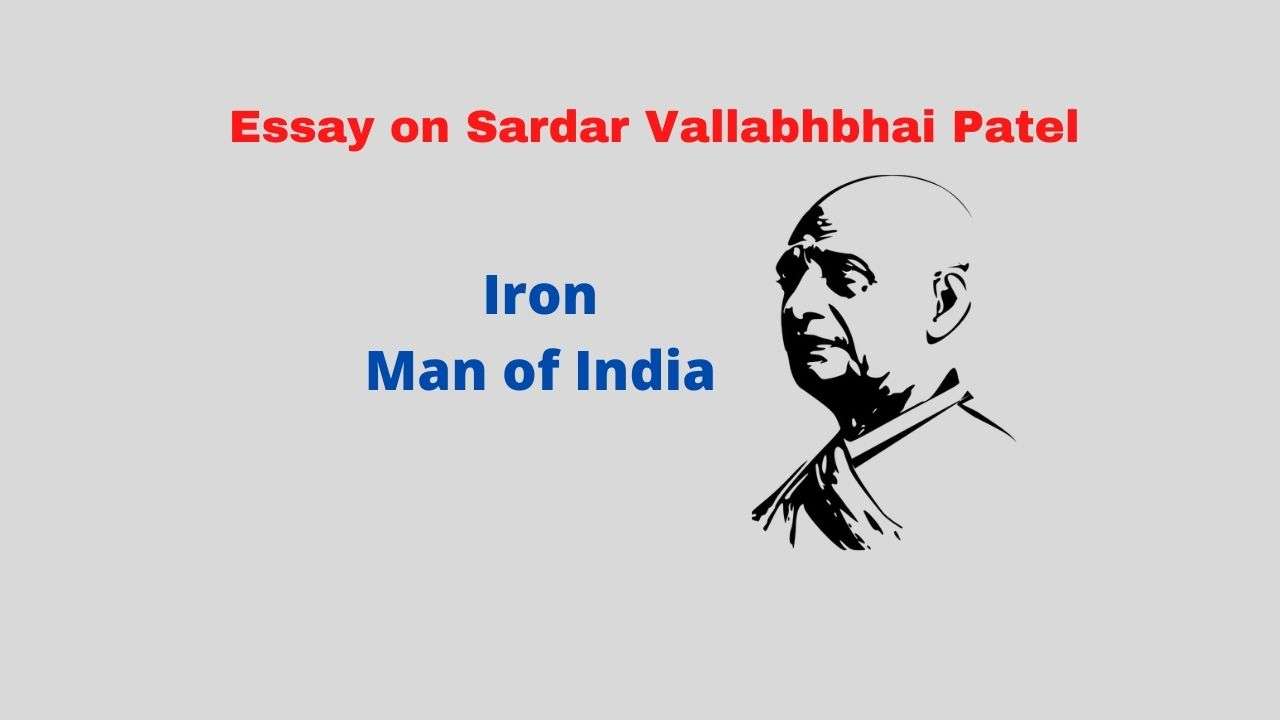 Essay on Sardar Vallabhbhai Patel in English for Student 500 Words

Sardar Vallabhbhai Patel Essay – The popularity of Sardar Vallabhbhai Patel with the Indian masses can be judged from the fact that many people wish that Sardar Patel and not Pandit Jawaharlal Nehru should have been the first Prime Minister of India. He was one of the greatest freedom fighters of our country. He is generally called, the “Iron Man of India”. It is mainly because of his strong will and firm determination in the service of his motherland.

Sardar Vallabhbhai Patel was born in Karamsad village in Gujarat on October 21, 1875. The name of his father was Jhanver Bhai Patel who was a brave, patriotic man, having fought in the army of Rani Lakshmi Bai of Jhansi against the British in 1857.

Sardar Patel went to school even while giving a helping hand to his father. After completing his primary education at his village school, he went to Nadiad and later to Baroda to get higher education.

Sardar Vallabhbhai’s real aim was to join Middle Temple in England. He had no money for going to England. However, his successful practice enabled him to save some money. Within 3 years, he managed to save 10 thousand rupees. It was a big amount in those days. He could easily go to England and study there with his enormous amount.

Sardar Vallabhbhai Patel was a man of strong will and unflinching determination. He was determined firmly to become a barrister. So he started saving money and went to England in 1910 in spite of his wife’s death.

Sardar Vallabhbhai Patel was greatly influenced by Mahatma Gandhi and he jumped into politics in 1918. His first important achievement was the removal of the system of “Begar” from Gujarat.

Another of his achievement was his success in getting the grievances of the peasants redressed regarding payments of revenue even on the failure of their crops. This he got done through the Gandhian nonviolent methods.

One of the greatest moments of his success came in regard to the Bardoli Satyagrah. It was his success that earned him the title “Sardar” from Mahatma Gandhi.

Sardar Vallabhbhai Patel was appointed as the 49th President of the Indian National Congress, organizing the party for election in 1934 and 1937 while promoting the Quit India Movement. When India became free, Sardar Patel held the portfolio of the Home Minister along with being the Deputy Prime Minister. He had already held several positions before India became free.

After Independence, his great achievement was the merger of more than 600 princely states into the Indian Union. He was a firm believer in the One Nation Theory, which resulted in the formation of Indian rules.

He is remembered as the “Patron Saint of India’s Civil Servants” for having established the modern All India Service System. The world’s tallest statue “The Statue of Unity” was dedicated to Sardar Vallabhbhai Patel on 31 October 2018 which is approximately 182 meters (597 ft.) in height.

Sardar Vallabhbhai Patel died on the 15th of December, 1950 at the age of 75. He will ever be remembered for his great works.

2. Sardar Vallabhbhai Patel statue is located in the Narmada district of Gujarat.

Answer: After Independence, his great achievement was the merger of more than 600 princely states into the Indian Union. It was his success that earned him the title of the Iron Man of India.