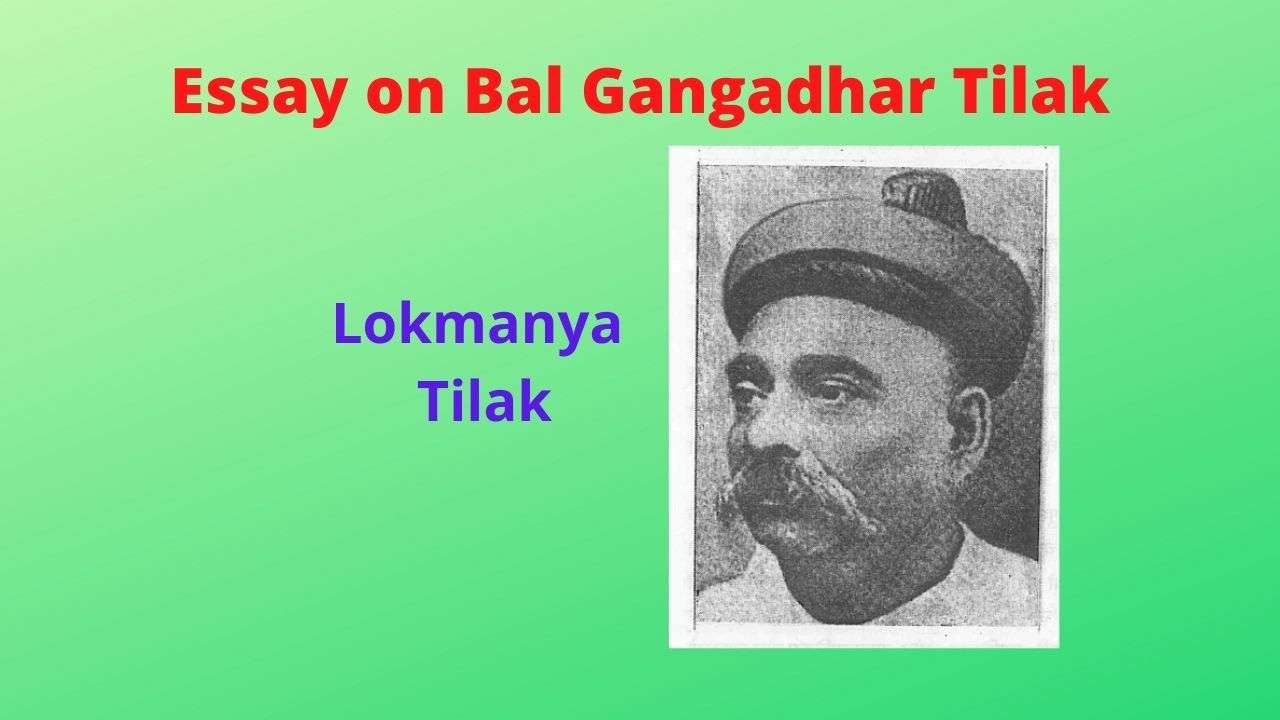 Essay on Bal Gangadhar Tilak 500 Words for Student and Children

Bal Gangadhar Tilak – The Father of the Indian Unrest

Essay on Bal Gangadhar Tilak – Bal Gangadhar Tilak was the real father of Indian nationalism and political unrest, a fact which cannot be denied in view of his undying patriotic fervor, which took him to address the Indian masses straight away with his pen as much as with his voice. His undying words, “Swaraj is my birthright and I shall have it,” will keep ringing in the heart of every Indian forever.

Bal Gangadhar Tilak was born on July 23, 1856, at Ratnagiri. He belonged to the ruling sect of the Maratha Kingdom on the Chitpavan Brahmins. The members of the Brahmin sect to which he belonged were strictly orthodox of living style. This had its positive effects on Bal Gangadhar Tilak and made him by nature a strict disciplinarian who would not tolerate any deviation from the right and righteous path.

Through the Brahmin sect to which he belonged once had some connection with the Maratha rulers, now it was not the same thing for the family in which he was born, his father being an ordinary school teacher drawing a meager salary even though. Later, he rose to be an inspector of primary schools.

Bal Gangadhar Tilak passed his matriculation examination at the age of sixteen and was married soon after, but meanwhile, he lost his father. After doing his matriculation from Poona High School, he pursued his higher education at Deccan College, Pune, and did he graduated in 1877. He took the degree of law in 1879.

He was very fortunate in having a grounding of Sanskrit and Mathematics from his father who was very fond of these subjects and later when he wrote his famous book “Gita Rahasya” when he was in jail and when he even advocated his theory of Aryans actually belonging to the North Pole, basing his theory on Vedic description and calculation, it should not be a matter of surprise for us.

In those days, there were not many highly educated young men in India and if Bal Gangadhar Tilak wanted, he could easily join some service. But, he was not interested in joining any service. He was highly patriotic at heart and he wanted to do something really good and great for his motherland. He wanted to serve the people in the real sense. Along with two of his friends, Agarkar and Chiplunkar, he started the New English School at Pune.

The main aim of Bal Gangadhar Tilak was to arouse the masses and besides laying stress on education, he wanted to reach the masses through the written word also. For this, Tilak started two weeklies one in the English language and the other in the Marathi language. Both started their publication in 1881. The name of English weekly was “Maratha” and the name of Marathi weekly was “Kesari”. As the New English School, the popularity of these weeklies was tremendous and he was unquestionably successful in his aim. In 1885, Bal Gangadhar Tilak established the Deccan Education Society. It was clear that he was not the one who would be ready to rest on his oars.

Bal Gangadhar Tilak was a great lover of the great Indian Heritage and a keen admirer of Shivaji. In order to enhance the spirit of patriotism and cooperation among the Indian people, he re-organized the Ganapati and the Shivaji festivals. He started the Shivaji festival to enable people to be able to recall the achievements and exploits of the great Indian hero Chhatrapati Shivaji. Bal Gangadhar Tilak was arrested and sent to Mandalay in Burma (now Myanmar) to serve a six-term. He utilized his time in prison in scholarly pursuits and wrote ‘Gita Rahasya’, a commentary on the Gita. He returned from Mandalay after completing his jail term, he started the Home Rule Movement. The Home Rule League played an important role in India’s Independence Movement and he visited England in 1918 as a delegate of this League.

Two of the dearest words to Bal Gangadhar Tilak were “Swaraj” and “Swadeshi”. In this respect, Tilak was a forerunner of Mahatma Gandhi and other leaders like Jawaharlal Nehru, when the former in particular, laid stress on Khadi and the spinning wheel.

Bal Gangadhar Tilak was quite forthright and fearless in expressing the demand for Swaraj.

Bal Gangadhar Tilak was one of the greatest Indian leaders who roused the masses against the foreign rule and imbued them with the spirit of patriotism, social service, and sacrifice. He will always be remembered for his words:” Swaraj is my birthright and I shall have it”. He has left an indelible impression on the history of India. He breathed his last on August 1, 1920.