Hello, Welcome To CBSE Digital Education. Today We Are Going To Discuss A Interesting Topic About Essay on  127th Amendment Bill 2021 or OBC Bill 2021. Read this Essay on OBC Bill 2021.

Essay on OBC Bill 2021 in English for Students 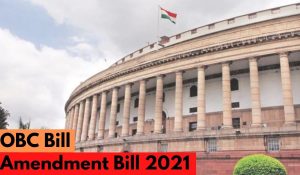 Lok Sabha on Tuesday approved Constitution Amendment Bill to restore the power of states to make their own OBC list; Lok Sabha passed The OBC Bill with 385 members voting in support and no member opposing it.

Even more astonishing is that The Lok Sabha Passed The Bill without any opposition at a time when the government and the opposition went face-to-face throughout the rainy season. Pegasus disputes agricultural law.

The new OBC Bill aims to restore the ability of the states to compile and maintain their own lists of socially and educationally backward groups. According to Social Justice and Empowerment Minister Virendra Kumar, who introduced the bill for discussion, the bill’s purpose is to make it clear that Union Territory governments have the power to retain their SEBC list. Kumar termed the bill as a “historical law” as it would benefit 671 sections.

OBC Bill In News Because Lok Sabha Passed The OBC bill with 385 members voting in support and no member opposing it. On Tuesday, the Lok Sabha passed the Constitution 127th Amendment Bill to restoring States’ rights to specify OBC groups.

Draft constitutional amendments require a special majority in both houses of Parliament (2/3 of the current members). This is the first time since the rainy season that regular debates have taken place in the Lok Sabha. The passage of this bill will benefit both the state government and the central government; the opposition parties are also supporting the bill. 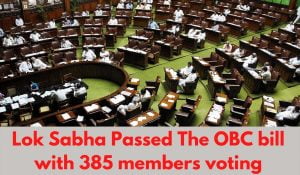 For the first time since the start of the parliamentary session on July 19, the Lok Sabha witnessed a structured debate, with the opposition and the government on the same page to pass a landmark law. The Constitution Bill 2021 (Amendment 127) was approved by 385 members who voted in favor, none opposed by any member.

The bill was passed after recounting as the 105th Constitutional Amendment Bill. Due to the Covid Protocol, some members of the House were seated in the Visitor Gallery, and therefore, the amendments and passage of bills were hand-delivered by hand slips.

What Is The Side Effects & Objective Of The Bill?

Constitutional Amendment Law No. 102 of 2018 contains Articles 338B, which deals with the composition, duties, and powers of the National Committee for Backward Classes, and 342A, which empowers the President for a particular denomination of socially and educationally backward communities. confers rights. . SEBCs) and the power of Parliament to change the list. Section 366 (26c) defines SEBC.

Parliament passed a draft constitutional amendment in August 2018 to give the National Committee for Backward Classes constitutional status. The amendment will restore the right of state governments to notify the list of socially and educationally backward classes (SEBCs).

Although there has been no exaggeration since the bill was passed, some opposition parties and the Supreme Court may be concerned. Since the state government benefits from the bill, they do not comment on it.

Expressing dissatisfaction with the Supreme Court’s decision on 3 August, the federal cabinet drafted the Constitution Amendment Bill, introduced in the Lok Sabha on 9 August. A majority in the Lok Sabha passed it on 10 August. It will soon be passed into law by the Rajya Sabha and the President.

So, in this way, under this act, the central government restores to the states and union territories the right to prepare their OBC list, which was with them before the change in the constitution in 2018.

On 10 August, the Lok Sabha passed a landmark bill allowing states to nominate Other Backward Classes (OBCs). The Constitutional Amendment Act 127 of 2021 restores the power of states to define socially and educationally backward groups (SEBCs), commonly referred to as OBCs.

The bill was necessary because of the Supreme Court’s interpretation of “certain provisions of the Constitutional Amendment Act. No. 102”, which included Article 342, Article 338B later, and Article 342A (two clauses). Article 338B deals with character, duties, and powers—National Committee for Backward Classes. Section 342A provides that the President of India, in consultation with the Governor, shall appoint the SEBC.

The bill is needed because over 600 OBC communities will lose access to appointments and reservations in educational institutions if the state list is rejected, affecting at least five total OBC communities.

Article 342A and Article 338B and 342 have been included in the Constitutional Amendment Act No. 102 of 2018. While Article 338B addresses the powers of the National Capital Bank, Article 324A allows the President to decide with the Governor whether socially and educationally backward classes are on the list…

The need for this amendment arose when the Supreme Court upheld the Constitutional Amendment Act No. 102 in its judgment on the Maratha reservation. However, the Supreme Court said that based on the National Committee for Backward Classes (NCBC) recommendations, the President would decide which social states will be part of the list of OBCs.

Answer: Restore the power of states to make their own OBC list.

Answer: Give the state governments the right to prepare the OBC list of their states.

Q. Which law of the constitution has been amended in the OBC bill?

Answer: With the passage of this bill, the amendment has been made in Act 102 of the Constitution.

Q. Which Articles of the Constitution are being amended in the OBC Bill?

Answer: With the passage of this bill, amendments are made to Articles 342A, 338B, and 366 of the Constitution.

Q. Who has passed the OBC bill?