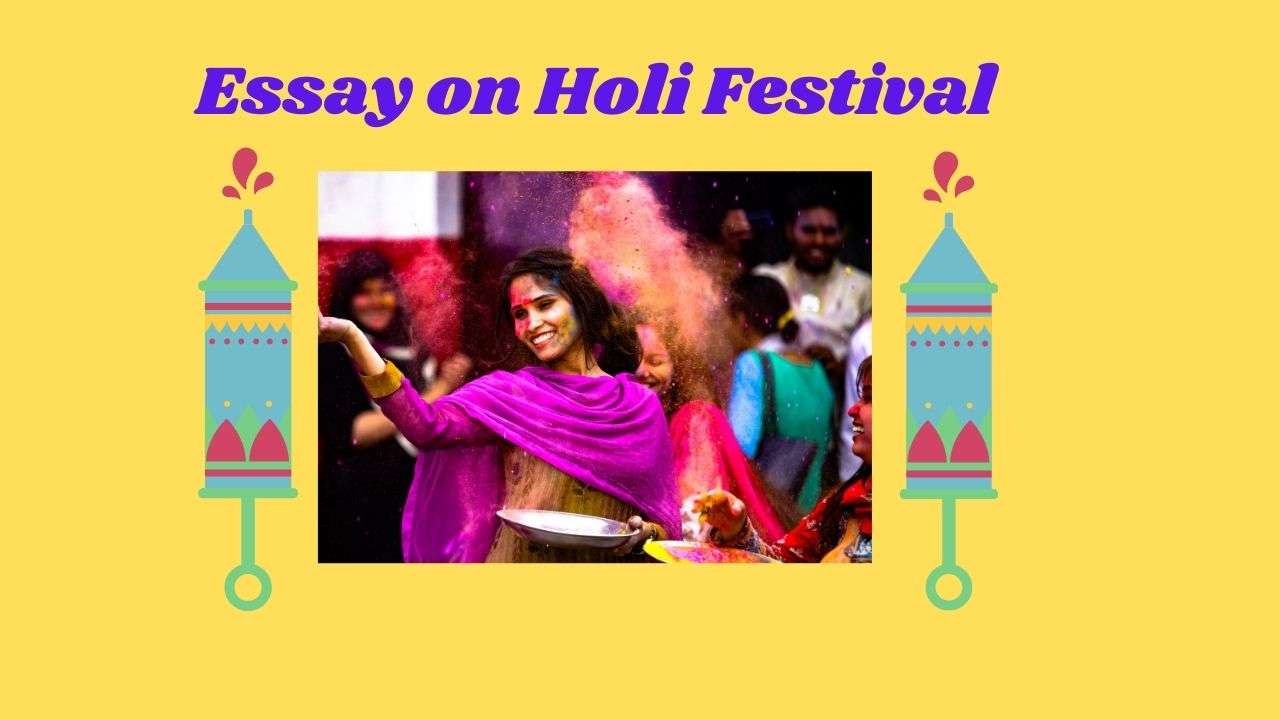 In this article, CBSE Digital Education provides complete information regarding long and short essay on Holi Festival in English.

The second essay is a short essay about holi of 400-500 words. These are suitable for students and children in classes 3, 4, 5, 6. In the last of this Holi festival essay, some important questions related to Holi Festival are given.

Essay on Holi in English for Students and Children 500+ Words

This long essay on the Holi festival is suitable for students of classes 7, 8, 9 and 10, 11, 12 and also for competitive exam aspirants.

Holi essay in English- India is a land of fairs and festivals. The Hindus, the Christians, and the Muslims have their own festivals. Holi is one of the most important festivals of the Hindus. It is a colorful festival of great joy and enthusiasm. This festival is celebrated all over the country as a day filled with complete fun, and enjoyment. Holi indicates the end of the winters and the beginning of the spring season. According to Hindu Calendar, it is celebrated on the full-moon night of the month of Phalgun (March). Holi festival is also known as the festival of colors.

During the day, woman folk worship a stack of wooden logs called Holi. Holi is lit in holy ways on the full moon night. The green ears of barley and gram are heated in the fire and distributed among friends and relatives. New friendships are initiated and old enmities are forgotten. Even today, everyone burns a stack of wood and cow dunk in the night and burn Holika, and the next day everyone plays Holi by rubbing colors on each other’s faces. People dress up in white clothes and play Holi with colors, water balloons, and water guns. They dance throughout the day and enjoy a special drink called “Thandai”.

Children throw colored water on each other while the elder people apply ‘gular’ or ‘abir’. People celebrate Holi by applying colors and hugging each other and forgot all the bitter emotions between them. People use natural colors for this festival and play with watercolor guns. On this happy day, people eat delicious food like Gujiya, Papad, Halwa, Non-veg, and drink Thandai, cold drink with other food items. Holi connects all of us and fills the colors of love and affection in our relationship.

Some people relate the festival of Holi to the legend of ‘Mahabharata‘.  On this death anniversary, Lord Krishna killed a demon named Putana.  Listening to this joy, the male women of the entire Vraja rose up.  That day he played colors and celebrated ‘Rasleela’.  Later this festival began to be celebrated all over the country.

Holi is a festival of love, universal brotherhood, and goodwill among individuals and communities. this festival gives us the message of unity and brotherhood.

In 2021, we have to celebrate Holi properly because a new virus has spread called Coronavirus. We must follow the manner of civilized citizens and respect others. Please follow proper social distancing and celebrate Holi with limited Gathering.

Short essay on Holi festival in English for Students and Children

The festival of Holi is celebrated on the day of Phalgun Shukla Purnima.  At this time, nature pours out its uncommon beauty to welcome the spring season. The song of the bhairo and the sweet tone of Kokila fascinate the mind.

It is said that Hiranyakashyapa, the king of the demons, was very powerful and tyrannical.  Taking the name of God in his kingdom was also considered a sin.  But Prahlad, the son of Hiranyakashyapa turned out to be a firm devotee of God.  He did not stop taking the name of God.  Hiranyakashyapa took many measures to kill Prahlada, but Prahlada survived the grace of God.  Finally Hiranyakashipu called his sister Holika.  Holika had the boon that fire could not burn her.  At the behest of Hiranyakashipu, Prahlad entered the fire with Holika.  The glory of God is peculiar.  Prahlad survived and Holika was burnt.  Holi is lit every year in memory of this holy event and this festival is celebrated with great pomp.

There is another reason to celebrate the festival of Holi.  Our country is an agricultural country.  Wheat and gram grains are half-cooked in the months of February and March.  Seeing this, the farmer wakes up happily.  To appease the fire god, he sacrifices the wheat hair in the fire. In the ancient days, a mass Yagya was performed on this day and the offerings of the Yagya were distributed to all the people. Holi is also a modern form of the same ancient tradition.  Even today people roast wheat ears on this day and eat them with great fun.

The boys and girls gather a pile of sticks and ducks.  At night this pile of wood and dung is set on fire.  People happily dance and sing around it.  Everybody roasts and gets food from the new crop.

On the next day of Holi, ‘Dhulendi‘ takes place.  From morning to evening, all the men and women, whether old or children, all of them, enjoy playing the holi.  On this day, the distinction of poor and rich, scholar and fool ceases.  Everybody sprinkles gulal on each other and puts abir.  The earth becomes colored by colorful pitchers.  On the streets, teams of almighty youths and elders are seen dancing, singing, and gargling.  This hooting of young people is a joy.

Playing Holi often ends afternoon.  Everybody takes a bath.  So that their body leaves color.  After bathing, they wear new clothes.  On this day special types of dishes are made, which are eaten with great love by everyone.  Special cultural programs are organized in the evening.  There is also a comic-poets conference somewhere and some special people are decorated with funny titles.  In fact, Holi is not just a festival, but a festival.  On this day, while there is immense joy in the minds of the people, the enemies also embrace and leave hatred and discrimination.  They forget their old mistakes and become friends again.

The festival of Holi is going to create excitement, so it should be celebrated with gaiety.  Nowadays many people hurl coal tar, dirty drain water, and mud on people, which no civilized person can tolerate.  As a result, quarrels also take place.  Some people drink alcohol and make dirty efforts on this day.  This reduces the sanctity of this festival.  Therefore, we should celebrate the festival of Holi in a civilized manner.

Answer: Some people relate the festival of Holi to the legend of ‘Mahabharata’.  On this death anniversary, Lord Krishna killed a demon named Putana.  Listening to this joy, the male women of the entire Vraja rose up.  That day he played colors and celebrated ‘Rasleela’.  Later this festival began to be celebrated all over the country.

2. Which Colour is best for Holi?

Answer: The Yellow gular is the trademark of the holi festival. Yellow, green, red color is best for Holi.

We hope that after reading this article you must have got detailed information about how to write essay on holi festival. I hope you like this article about the Holi Festival Essay 2022.

If you want to ask any queries regarding the Essay on Holi Festivals then message us in the comment section, and we will reply to you soon. For More Updates Join Our Telegram Channel or Click here for More Educational News and Bookmark this page.