Hello, Welcome To CBSE Digital Education. Today We Are Going To Discuss A Interesting Topic About Triple Talaq Essay in English.

After reading this article about Triple Talaq Essay, you will be able to answer all important questions related to it. CBSE Digital Education provides all information regarding the essay on Triple Talaq in English.

Men and women are two integral parts of any society. Society cannot be imagined without any one. According to Swami Vivekananda, “Just as a bird cannot fly with one wing, similarly a society cannot develop by neglecting women.

In fact, the biggest identity of a civilized and developed society is that the life of women in that society should be full of self-respect.

In this context, to end the practice of triple talaq prevent in Muslim society, the Indian Parliament has enacted the triple Act or the Muslim Women (Protection of Rights on Marriage) Act, 2019 so that the women can live their lives with self-respect.

What is Triple Talaq?

Triple talaq, also called talaq-e-biddat, is a form of instant Islamic divorce that has been practiced by Indian Muslims. The practice of instant triple talaq was held unconstitutional by the Hon’ble Supreme Court in August 2017. The use and status of triple talaq in India have been a matter of controversy and debate. Those questioning this practice have raised issues of justice, gender equality, human rights, and secularism. 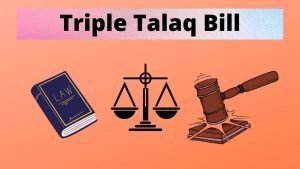 The debate involves the Government of India and the Supreme Court of India and is linked to the debate about a Uniform Civil Code (UCC) described in Article 44 of the Constitution of India. In July 2019, the Parliament of India declared the practice of triple talaq illegal, unconstitutional and made it a punishable act.

The practice of triple talaq is considered terrible in theology. However, it was previously recognized as valid by law. This practice was against the basic principle of the Right to Life laid down by the Indian Constitution (Article 21) and violated the dignity of women.

Triple Talaq was also against Article 14 of the Constitution (which guarantees equality before the law). This practice amounted to gender discrimination and was not in accordance with the modern principles of human rights.

This practice also wreaks havoc in the lives of divorced women and their children, especially those belonging to the weaker economic sections of society.

While supporters presented their arguments in favor of the triple talaq law, arguments were presented in its opposition as well. Those who have opposed this say that if the husband who divorces will be sent to jail for three, then how will he give maintenance to the wife and child.

Opponents say that this Act talks about paying maintenance to Muslim women, but the modalities for determining that maintenance have not been told.

Historical Timeline Leading to an End of Triple Talaq

Some of the matters related to the issue of triple talaq are as follows:

While the Supreme Court upheld the dignity of Muslim women by abolishing discriminatory triple talaq, similar gender justice may be on the anvil for women in religious groups. In October 2015, the Supreme Court of India emphasized the need for a Uniform Civil Code and stated that “it cannot be accepted, otherwise every religion will say that it has the right to decide various issues in terms of its personal law. We don’t agree with that at all. It has to be done through a court decree.”

In conclusion, it can be said that the continuation of triple talaq in a secular and democratic republic like India was tantamount to a stain. By making a law against the practice of triple talaq, legally Muslim women will get equal rights with men, now women will not be afraid of Talaq.

With the implementation of this law, organizations such as the Muslim Personal Law Board representing Muslims will take a positive attitude towards other social reforms. Ultimately this law will protect the dignity of Muslim women, give them legal protection and give them the right to live with dignity.