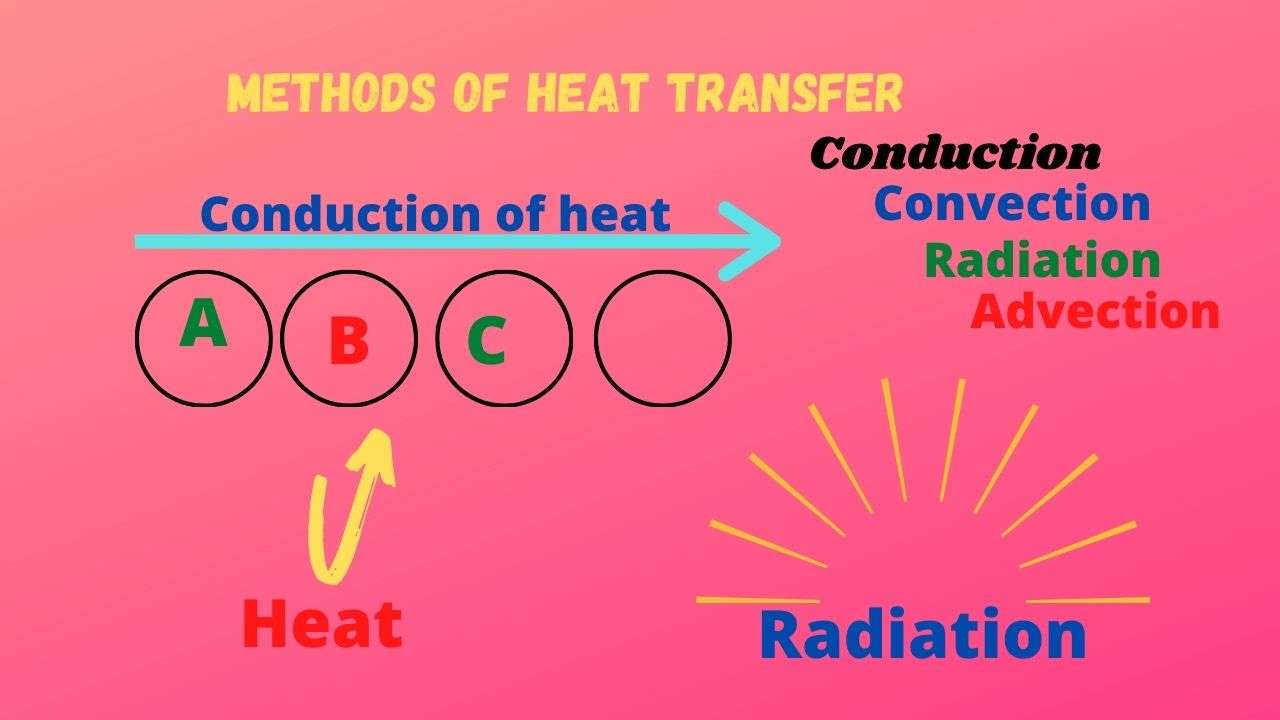 Types of Methods of heat transfer

Heat is a form of energy that produces in us the sensation of hotness or coldness. Heat flows from the high-temperature side to the low-temperature side irrespective of the amounts of heat possessed by the bodies in contact. Heat can be transferred from one place to another by four different methods of heat transfer. There are:

It is a process in which heat is transmitted from one part of a body to another at a lower temperature through molecular collisions, without the actual flow of matter. In solids, heat travels by conduction. It means that it follows ‘pass it on’ way the particles where heat energy is passed from one medium to another till all have the same amount of heat.

In liquids and gases, heat travels by convection. Each particle comes to take the heat, becomes lighter, and moves up. The colder ones keep on moving down, get heated, and move up.

There are two types of convection:

If the heated material is forced to move by an agency such as a pump or a blower, the process of heat transfer is known as forced convection.

Radiation is the process by which heat is transmitted from one place to another without leaving the intervening medium. It occurs in objects that emit electromagnetic radiation. No medium is required for the heat to travel.

During day time, the land gets hotter than the water in the sea. So, air on land gets heated by convection and moves up. This place is then occupied by the cold air from the sea. This way a cycle of air movement starts known as a land breeze.

During the night, the land gets cooler faster than the water in the sea. So, the air touches the sea gets hotter, moves up and air from land moves towards sea generating a sea breeze.

Answer: The electromagnetic radiation emitted by a body by virtue of its temperature is known as thermal radiation. It is also called radiant energy.

Answer: Wool is a bad conductor of electricity. It doesn’t allow body heat to escape. Air trapped in wool fibers also acts as an insulator. Two thin blankets joined together are warmer than one thick blanket as the air between two thin blankets also provides insulation.

Answer: There are two bodies, one hot and another cold, heat generally moves from the hot body to the cold body till both are at the same temperature