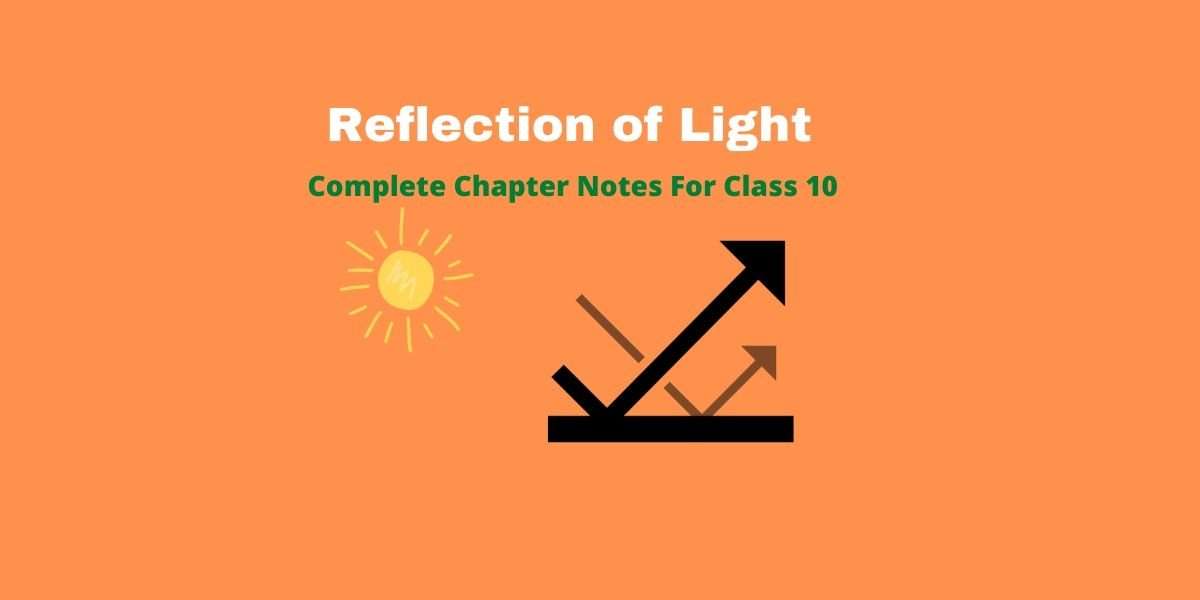 Lightwave travels with a speed of 3 x 108 m/s in free space. Its speed depends on the medium. For example, in water or glass, its speed is considerably less than the speed in air or space. It is transverse in nature and does not require any medium to propagate.

Light travels in a straight line –Rectilinear propagation. The straight line indicating the path of the light (arrow-direction) is known as a ray. A bundle of rays originating from the same source of light in a particular direction is known as a beam of light.

When light falls on a surface and gets back into the same medium, it is called the reflection of light. A highly polished surface or mirror reflects the light. Reflection takes place when light bounces off by an opaque object. If the surface is shiny and smooth, like glass, water, or polished metal, the light will reflect at the same angle as it hits the surface. This is called specular reflection.

The reflection of light based on the nature of the reflecting surface can be regular or diffused.

It takes place when the surface is smooth or plane. It is difficult for the person to see in the regularly reflected light because of the glare produced or the dazzling effect.

Diffuse reflection takes place when light hits an object and reflects it in lots of different directions. This happens when the surface is slightly rough. Most of the things we see are because light from a source has been reflected by it.

These laws proposed by Euclid, a state that

A plane mirror always forms an erect, virtual, size to size image, at the same distance as the object is, laterally inverted, but at the back of the mirror. Properties of Image formation in the plane mirror

The different features of the image formed by a plane mirror include:

What do you mean by image?

The point of convergence or the point from where the light appears to diverge after reflection or refraction is known as an image.

There are two types of images:

A real image is formed by the light rays after reflection or refraction when they are actually meet or intersect with each other or actually converge at a point.

A virtual image is formed by the light rays after reflection or refraction when they appear to diverge from a point or appear to meet when they are produced in the backward direction, or appear intersection of the rays observed.

The inside curve of a spoon is an example of a concave mirror. These mirrors are used in certain types of astronomical telescopes called reflecting telescopes. The mirrors condense lots of light from faint sources in space onto a much smaller viewing area and allow the viewer to see far-off objects and events in space that would be invisible to the naked eye.

Light rays travel towards the mirror in a straight line and are reflected inwards to meet at a point called the focal length.

Convex mirrors curve outwards, like the outside of a spoon or a balloon. Parallel rays of light hit the mirror and are reflected outwards. If imaginary lines are traced back, they appear to come from a focal point behind the mirror. Convex mirrors irrespective of the size or position of an object from the mirror always produced a diminished and virtual image between the pole of the mirror and its focus.

(i) Convex mirrors are useful for shop security as an anti-theft mirror and rear-view mirror on vehicles because they give a wider field of vision.

(ii) The convex mirror can be used as a device to check theft in shops.

(iii)  The convex mirror can be used to lighted a large area.

(iv) The convex mirror can be used as a rear-view mirror in automobiles because it gives a wider field of view as the mirror is curved outwards and produces an erect and diminished image of the traffic behind the driver of the vehicles.

The important term associated with mirror

Aperture: The width of the reflecting surface from which reflection takes place is called the aperture.

Pole: The central point of the reflecting surface spherical surface is called pole (P). It lies on the surface of the mirror.

Principal axis: The straight line joining the pole and the center of curvature is called the principal axis.

Focal Length: The length of separation between the pole and the focus is known as focal length.

The relation between the Radius of curvature and focal length.

The radius of curvature is twice the focal length, R=2f.

The set of rules, to use ‘+’ or ‘−‘ signs with the values while doing any problem in optics, is called sign convention. They are –

A formula that gives the relationship between focal length(f), object distance(u), and image distance(v) of a spherical mirror is known as the mirror formula. This formula is valid for concave and convex mirrors in all situations for various positions of this object.

Magnification (m) is negative for real and inverted images and positive for virtual and erect images. So, magnification is always positive for the convex mirror, while it depends on the position of the object in a concave mirror. If,

1 thought on “Reflection of Light – Complete Notes with Amazing PDF”