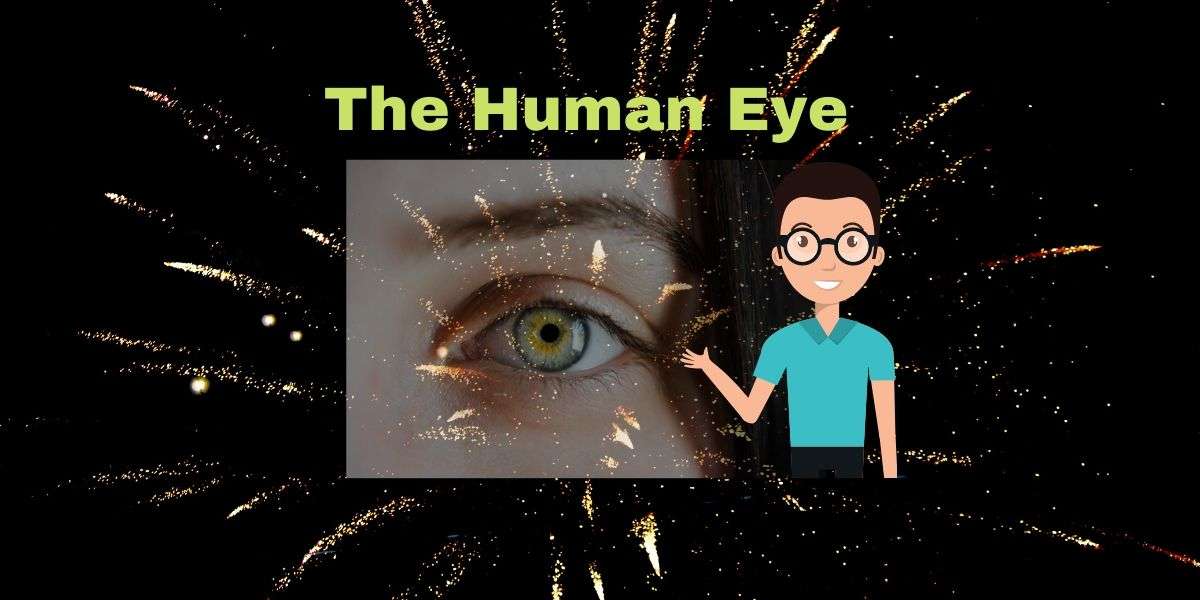 Definition of the Human Eye

The human eye (24-25mm in diameter) is the organ that gives the sense of sight, allowing us to observe and learn about our surroundings. In other words, the natural optical devices, using which, man could see objects around him. It forms an inverted and real image of the light-sensitive surface called the retina.

The eyes allow us to see and interpret the shapes, colours, and dimensions of an object. The eye is able to detect bright and dim light but is the most sensitive to visible light of wavelength 5500 Ai.e., yellow light.

Draw the labelled diagram of the human eye and explain human eye structure: Cornea: A thin membrane covering the surface of the eyeball through which the light enters into the eye.

Iris: A dark muscular diaphragm located just behind the cornea.

Pupil: A black opening between the aqueous humour and eye lens. It regulates and controls the amount of light entering the eye.

Ciliary muscles: Modify the curvature and focus of the eye lens. Hold the eye lens in position.

Retina: A real membrane having an enormous number of light-sensitive cells. It acts like a screen.

Sclera: White part of the eye is called the sclera. The sclera is an outer layer of the eye.

Choroid: It provides the nutrition of our eyes. The choroid is made from blood, glucose and nutrition.

The function of the Human Eye

Light waves of an object enter the eye first through the cornea, a clear dome-shaped structure in the front of the eye. The cornea is responsible for the maximum refraction of light incidents on the eye. The light then passes through the pupil, the circular opening in the centre of the coloured iris.

Fluctuations in the intensity of incoming light change the size of the eye’s pupil. The pupil controls the amount of light that enters the eye. As the light entering the eye becomes brighter, the pupil constricts, due to papillary light response while as the light gets dimmer, the pupil dilates. The smallest area of the retina called the macula provides the best vision of any location in the retina. Within the layers of the retina, light impulses are changed by rod cells and cone cells into electrical signals to be carried by the optic nerve to the brain for interpretation.

As a result of which, there is no distant focus inside and the person fails to visualize the proper dimension of the objects. It is corrected by using cylindrical lenses.

Among humans after the age of 45 years, eyes are most likely to be affected by Presbyopia because of the lessening flexibility of eye lens along with weakening ciliary muscles which control the eye lens focal length. It is corrected using glasses having a bifocal lens in which the upper part is concave and the lower part is a convex lens.

Cones with specific colours are there in the retina. If some cones are absent, the distinction of colours is not possible. In such a case, the person is said to be colour-blind. This defect arises due to the absence of colour responding to cones cells in the retina and due to genetic disorder. No cure is developed till now by science.

Sometimes, the crystalline lens of the eye, at old age, becomes milky land cloudy due to the growth of a thin membrane over it. This causes a partial or complete loss of vision. This condition is called a cataract. This is corrected by the surgical removal of extra growth.

It was developed by Louise Braille in 1821 but was adopted years later in 1932. The system has 63 dots patterns or characters in which each character represents a letter- these patterns are embossed on Braille sheet to recognize them by touching with dots slightly raised, In India Ravindra Jain obtained his Sangeet Prabhakar degree, Lal Advani, himself visually challenged represented India in UNESCO on Braille problem. Helen A. Keller an American author and lecturer wrote books in cheding “story of my life”.

3 thoughts on “The Human Eye – Structure and Function”