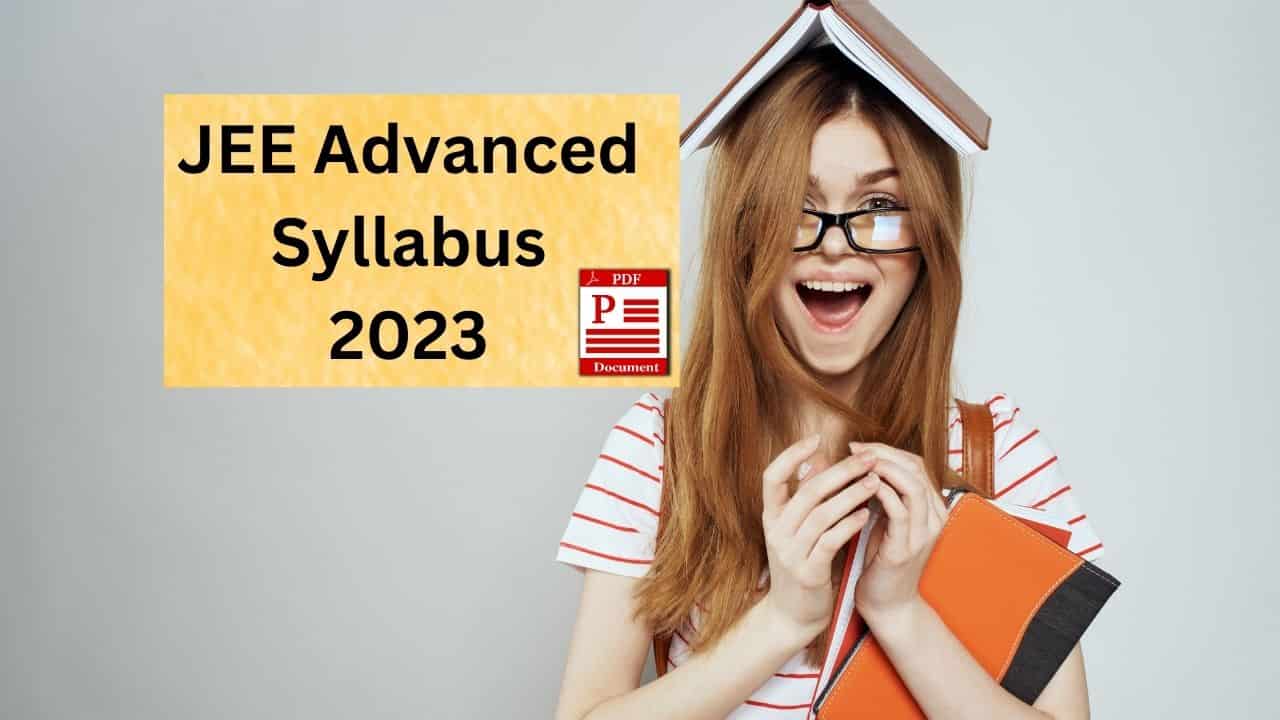 JEE Advanced Syllabus 2023 Check Here: IITs offer enrollment into undergraduate courses leading to a bachelor’s, integrated master’s, or Bachelor-Master Dual Degree in Engineering, Sciences, or Architecture through JEE (Advanced). Thus, the JEE Advanced 2022 syllabus is designed to include topics that will put applicants to the test for IIT-level academia. The JEE Advanced syllabus consists of three subjects: physics, chemistry, and mathematics.

The exam consists of two papers, both of which contain PCM questions. Each paper is three hours long. It is mandatory to take both papers. The question papers will include questions designed to assess candidates’ comprehension, reasoning, and analytical abilities.

The JEE Advanced Exam 2023 is only administered via computer-based testing (CBT). Candidates are advised to take practice tests available on the website to become acquainted with the CBT mode. Download the JEE Advanced syllabus PDF below to learn about the topics that will be covered in the exam. For JEE Advanced preparation, applicants must follow the latest JEE Advanced Syllabus.

Check JEE Advance Syllabus for Examination 2023 for the Subjects Physics, Chemistry, and Mathematics.

Physics is all about concepts and how they are applied. If you believe that memorizing essential formulas will help you in this subject, you are mistaken. Candidates must understand each concept and apply it appropriately.

Experiments based on using Vernier calipers and screw gauge (micrometer), Determination of g using a simple pendulum, Young’s modulus – elasticity of the material Surface tension of water by capillary rise, and effect of detergents. Specific heat of a liquid using a calorimeter, the focal length of a concave mirror and a convex lens using the u-v method, the Speed of sound using a resonance column, Verification of Ohm’s law using a voltmeter and ammeter, and specific resistance of the material of a wire using meter bridge and post office box.

Systems of particles; Centre of mass and its motion; Impulse; Elastic and inelastic collisions. Rigid body, a moment of inertia, parallel and perpendicular axes theorems, the moment of inertia of uniform bodies with simple geometrical shapes; Angular momentum; Torque; Conservation of angular momentum; Dynamics of rigid bodies with fixed axis of rotation; Rolling without slipping of rings, cylinders, and spheres; Equilibrium of rigid bodies; Collision of point masses with rigid bodies. Forced and damped oscillation (in one dimension), resonance.

Capacitance; Parallel plate capacitor with and without dielectrics; Capacitors in series and parallel; Energy stored in a capacitor.

Rectilinear propagation of light; Reflection and refraction at plane and spherical surfaces; Total internal reflection; Deviation and dispersion of light by a prism; Thin lenses; Combinations of mirrors and thin lenses; Magnification.

Chemistry is often thought to be easier than Mathematics and Physics, but mastering the subject requires consistent practice. Any topic or chapter from Class 11 or Class 12 necessitates consistent practice. According to the JEE Advanced Chemistry syllabus, the weightage of Class 11 chapters is approximately 30% to 40%, with the remainder being Class 12 chapters. However, the majority of the topics covered in Class 11 are fundamental and necessary for understanding Class 12 topics.

Hydrogen: Position of hydrogen in the periodic table, occurrence, isotopes, preparation, properties, and uses of hydrogen; hydrides – ionic, covalent, and interstitial; physical and chemical properties of water, heavy water; hydrogen peroxide-preparation, reactions, use, and structure; hydrogen as a fuel.

p-Block Elements: Oxidation state and trends in chemical reactivity of elements of groups 13-17; anomalous properties of boron, carbon, nitrogen, oxygen, and fluorine with respect to other elements in their respective groups.

Group 18: Chemical properties and uses; compounds of xenon with fluorine and oxygen.

Alkanes: Homologous series; physical properties (melting point, boiling point, and density) and the effect of branching on them; homology of ethane and butane (Newman conjecture only); Preparations from alkyl halides and aliphatic carboxylic acids; Reactions: Combustion, halogenation (including allylic and benzyl halogens) and oxidation.

Mathematics is a crucial subject in the JEE Advanced exam. Engineering students should begin studying its various topics in lower classes. It will aid students in comprehending more complex concepts in higher-level classes. Class 11 chapters serve as the foundation for Class 12 chapters as well. However, the weightage of topics in Class 11 mathematics is 40% to 50%, so these topics cannot be ignored.

Logarithms and their properties, permutations and combinations, binomial theorem for a positive integral index, and properties of binomial coefficients.

Equations of a parabola, ellipse, and hyperbola in standard form, their foci, directrices and eccentricity, parametric equations, equations of tangent and normal. Locus problems.

Along with the syllabus, candidates must understand the exam pattern and question paper design:

How to Study the JEE Advanced Syllabus 2023

Do not begin anywhere: Plan your approach by categorizing topics as important or less important. Determine which topics are your strengths and which are your weaknesses. Now that you have all of the categories, begin with the following topics in the following order:

Include everything: Although some topics are more important, they must all be addressed. The JEE Advanced is not your typical exam. It is unpredictable and has questions on every subject.

1. Has the JEE Advanced Syllabus for 2022 been altered? Is everything still the same?

Answer: The JEE Advanced syllabus will remain the same in 2022. It will change in 2023.

2. Should a candidate concentrate on the JEE Main or Advanced syllabus?

Answer: JEE Main is the prerequisite for JEE Advanced. The duo syllabus has not changed significantly. Candidates must prepare for both exams while keeping their syllabus in mind. Candidates should also attempt the JEE Advanced level problems.

3. Who develops the JEE Advanced syllabus?

Answer: The syllabus for JEE Advanced 2023 will most likely be set by one of the seven IITs in charge of administering the exam. The syllabus from previous years is also used by the authorities.

4. What subjects are taken into account for JEE Advanced eligibility?

Answer: The minimum qualifying mark for JEE Advanced is 75% in class 12. Candidates must have studied Physics, Chemistry, Mathematics, and either English or Hindi.

Answer: Both Paper I and Paper ii are required.