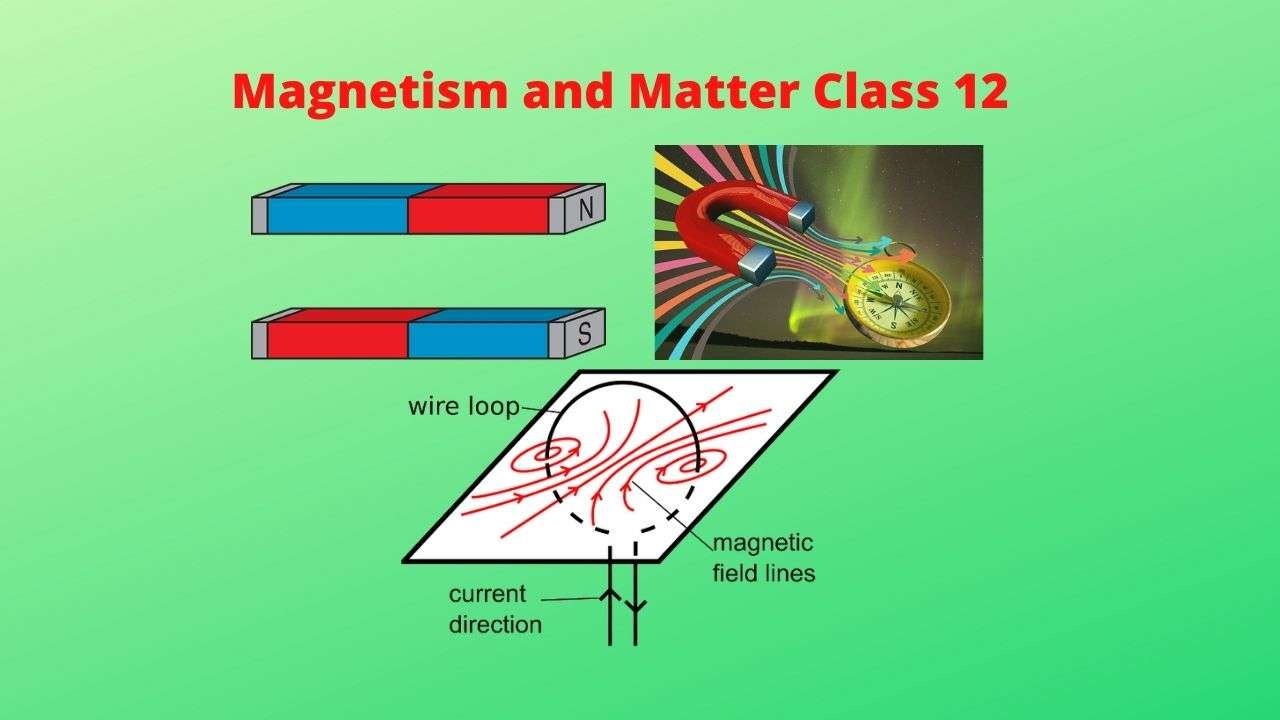 The property of any object by virtue of which it can attract a piece of iron, cobalt, etc. is known as magnetism. Natural Magnet is an ore of iron (Fe2O3) that attracts small pieces of iron, nickel, and cobalt towards it.

It is a branch of physics in which we study the properties of bar magnets mainly.

The magnetic moment is defined as the product of the pole strength of either pole and the magnetic length of the bar magnet.

Magnetic lines of force originate from North Pole (N-Pole) and terminate on South Pole (S-pole). The tangent at any point on the lines of force indicates the direction of the magnetic field at that point inside the bar magnet.

The magnetic potential is required work done to bring a unit to the North Pole from infinity to a given point. It is a scalar quantity.

It can be defined as the strength of a magnetic pole to attract magnetic material towards itself. It is a scalar quantity and its SI unit is ampere-meter (A-m).

The dipole moment of a magnet of magnetic dipole is defined as the product of its pole strength and magnetic length.

Where qm is the pole strength

And 2l is the magnetic length of the dipole from S-pole to N-pole.

The magnitude and direction of this field can be obtained approximately by assuming that the earth has a magnetic dipole movement of about 8 x 1022n J/T located at its center.

The axis of this dipole makes an angle of about 11.5 degrees with the Earth’s axis of rotation.

This field arises due to the rotational motion of the earth. When a bar magnet is freely suspended near the earth’s surface, it stays in equilibrium along the Geomagnetic axis (North-South direction), the North Pole is directed due north, and the South pole is directed due south.

Earth behaves like a huge magnet. The value of the magnetic field on the surface of the earth is a few tenths of a gauss. Earth’s magnetic strength varies from place to place on the earth’s surface.

The angle between the earth’s magnetic field and the horizontal direction in the magnetic meridian is called the magnetic inclination or angle of dip at that point.

The magnetic moment per unit volume is defined as the intensity of magnetization.

In a vacuum, the magnetic intensity is defined as a magnetic field divided μo.

For magnetic medium magnetic intensity is written as,

Where I will be the intensity of magnetization

For diamagnetic and paramagnetic substances, the intensity of magnetization is directly proportional to magnetic intensity.

Where x is a constant which is called susceptibility.

X is positive (+ve) for paramagnetic and negative (-ve) for diamagnetic.

The magnetic field that exists in a vacuum and induces magnetism is known as the magnetizing field.

The magnetic induction may be defined as the number of magnetic lines of force crossing per unit area normally through a material.

The ability of the magnetizing field to magnetize a material medium is expressed by a vector H.

The magnetic permeability of a material may be defined as the ratio of its magnetic induction B to the magnetic intensity H.

X is proportional to 1/T

Where ‘C’ is a constant, it is called Curie’s constant.

Those substances which when placed in a magnetic field it gets magnetized opposite to the direction of the magnetizing field (external field). Thus, the net field inside the materials is smaller than the external field; such a substance is called a diamagnetic substance.

When a demagnetized material (soft iron) is placed in B-field, the material gets magnetized along the direction of the external field (magnetizing field).

When the external field is increased, the intensity of magnetization increase to the maximum value, it is represented by Curve ‘OA’

When the external field is decreased to zero, the intensity of magnetization is not zero. It is represented by the curve ‘AC’.

The intensity of magnetization (OC) in absence of an external field is called retentivity of material or residual magnetism.

The larger the area of the loop, the larger will be the heat produced.

The material used for making permanent magnets must have the following properties:

The material used for making cores of electromagnets must have the following properties:

The materials used for making cores of electromagnets must have the following properties:

Answer: The value of the reverse magnetizing field that should be applied to a given sample in order to reduce its intensity of magnetization or magnetic induction to zero is known as coercivity.

Answer: The value of the intensity of magnetization of material, when the magnetizing field is reduced to zero is known as retentivity or residue magnetism of the material.

Some important links of Physics. Also, read the following chapter.

I hope you like this article about Magnetism and Matter Class 12. Comment below for doubt related to this chapter magnetism and matter class 12.