Essay On Advertisement for Students

The history of advertising dates back to 3000 BCE. In the Babylonian civilization, historians and archaeologists have uncovered evidence where fascinating signs and images were displayed outside.

In addition, archaeologists have discovered evidence in Roman civilization where signs were displayed outside homes offering property for rent.

Later, during the medieval period merchants employed “criers” who read public notices and also praised the goods sold by their merchants. In modern times an advertisement is shown through print media such as newspapers, magazines; Digital platforms such as Radio, TV, Internet, etc. ​Advertising facilitates mass marketing.

An advertisement is a form of marketing communication used to promote or sell something, usually a commercial product or service.

Advertising is nothing but a paid form non-personal presentation or promotion of ideas, goods, or services by an identified sponsor for the purpose of spreading information relating to an idea, product, or service and selling the product or increasing sales volume. The real purpose of advertising is effective communication between producers & consumers.

Nowadays, it is a trend, along the western lines, to give some incentive to potential buyers. We also learn about some rewards schemes on the purchase of a particular pack or quantity from the advertisement. Sometimes there is a “rub and get the prize” arrangement. 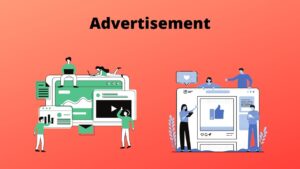 There are many words and expressions to attract, entice or rob a customer such as “sale”, “grand sale”, “sale on sale”, etc. Usually, big discounts of 10 to 50 or even more percent are promised. In fact, these discounts and rewards are given only out of the pocket of the customers as they are added to the price even before the goods are sold or offered with a discount.

Now, new methods of marketing are being used by management experts. Among them, we can list items such as direct mail, yellow pages, business directories, listings, handbills, posters, hoardings, banners, market guides.

The art of advertising is mainly based on the concept of stimulation, that is, to encourage the potential customer to make up his mind to buy the product.

Now, other means and methods of stimulation are being tried and practiced and advertisements can become redundant day by day. Many times we see that reasonable or so-called competitive rates, quality, elegance, and smartness of salesmen and salesgirls, and sometimes the prime location of a sales depot or showroom can do more than any advertisement through media.

Some advertisements serve a public purpose by spreading awareness among the public. They help in educating the audience about an issue or concern e.g. “Jago Grahak Jago” campaign of the Government of India.

One such example is the Lifebuoy advertisement spreading awareness about maintaining home hygiene and its impact on people’s health.

Another positive effect of advertising is to emphasize social values through them, for example, awareness of the harmful effects of intoxicants such as tobacco or alcohol, or drugs. Such advertisements carry a social message to the masses and reach far and wide across the country.

Through advertisements, we can spread the information or benefits of a campaign at a rapid rate and with far-reaching consequences. The Polio eradication program in India has been successful only with the help of advertisements.

There are also some negative aspects of advertising which can be harmful to people in many ways as the product promoted by a celebrity does not ensure its quality.

Sometimes, the product may not be of excellent quality, but because a celebrity is advertising for it, common people buy it which can be confusing sometimes. Another downside of advertising is the hidden costs associated with products or services. Products that are highly advertised become expensive because of the cost incurred on advertising.

Ethical advertising is about being truthful about the product or service and never exaggerating the capabilities of a product/service or hiding its flaws. Since markets run in fierce competition, it is necessary for private companies to spend huge amounts of money on advertising.

In short, we can say that advertising has positive as well as negative impacts on society. The balance between “what is more important” and what is not really needed should be more focused and practiced accordingly.