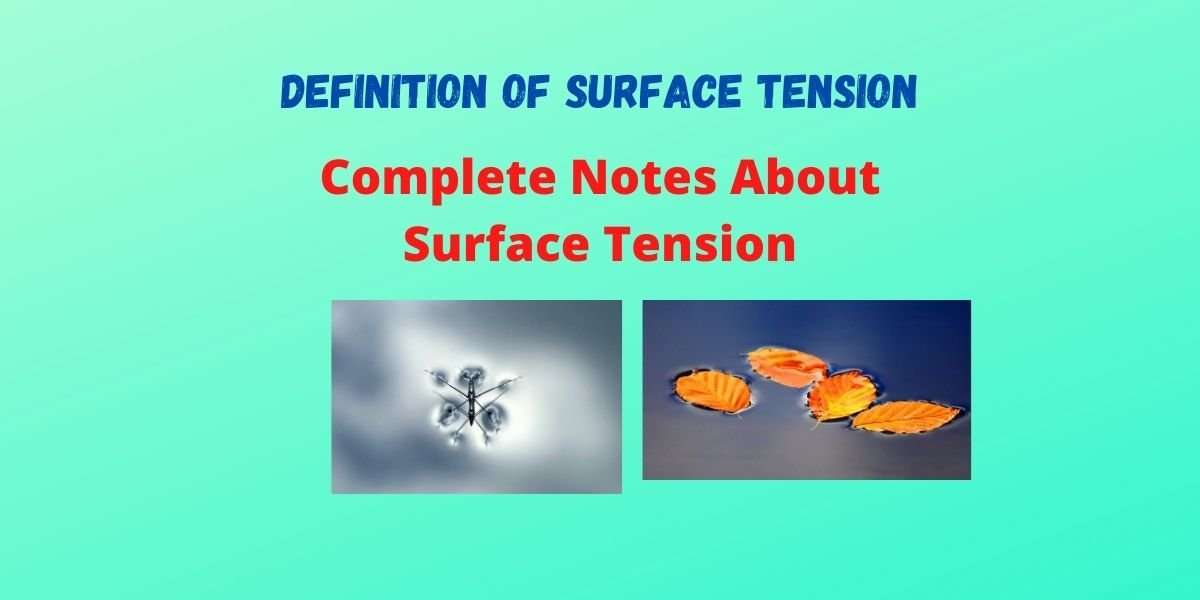 Let’s start with the introduction of “Definition of Surface Tension”.

It is defined as the force per unit length acting at right angles to an imaginary line drawn on the free surface of the liquid. When the surface is between two liquids (such as water and oil), it is known as “interface tension”. Where T is free surface energy density equal to W/dA

What is Surface Tension? Cause of Surface Tension

The different intermolecular forces, like Van der Waals forces, draw the liquid particles together. Along the surface, the particles are pulled towards the rest of the liquid.

By adding impurities to the liquid, the nature of the bonding between the molecules changes.

Example: When common salt is dissolved in water, the surface tension of the saltwater is more as compared to water.

Example: The addition of detergents, soap as well as phenol decreases the surface tension of water.

The surface tension of liquid decreases by increasing temperature. If the temperature increases, the average separation b/w the molecules increases & due to that the cohesive force decreases.

The surface tension of liquid becomes zero (0) at a particular temperature known as the critical temperature of that liquid.

When using a water dropper the water does not flow in a continuous stream, but rather in a series of drops. The spherical shape of the drops is caused by the surface tension of the water. However, the only reason the drop of water is not completely spherical is because of the force of gravity pulling down on it. In the absence of gravity, the drop would minimize the surface area in order to minimize surface tension, which would result in a perfectly spherical shape.

It is because of surface tension, most of the fruits we see are spherical or roughly spherical in shape. They intend to occupy the minimum surface area for the volume of matter, they contain.

When we blow a soap bubble, we create a pressurized bubble of air that is contained within a thin, elastic surface of the liquid. Most liquids cannot maintain a stable surface tension to create a bubble that is why soap is generally used in the process, it stabilizes the surface tension through something called the Marangoni effect.

The density of these objects is greater than water yet the surface tension along the depression is enough to counteract the force of gravity pulling down on the metal object. Floating of eggs in water is also because of surface tension.

The pressure inside a Soap Bubble

Suppose pressure inside the soap bubble of radius R, ignoring the very slight difference in inner and outer radius, the circumference is 2πR.

Each inner and outer surface will have a pressure of r along the entire length, so that total force from the surface tension.

Inside the bubble, there is a pressure ‘p’ that acts over the entire cross-section πR2, resulting in a total force of (πR2).

The bubble is stable, the sum of these forces must be zero.

Pressure in a liquid drop

Analyzing a drop of liquid, as opposed to a soap bubble, is simpler. Instead of two surfaces, there is only the exterior surface to consider, so a factor of 2 drops out of the earlier equation to yield: