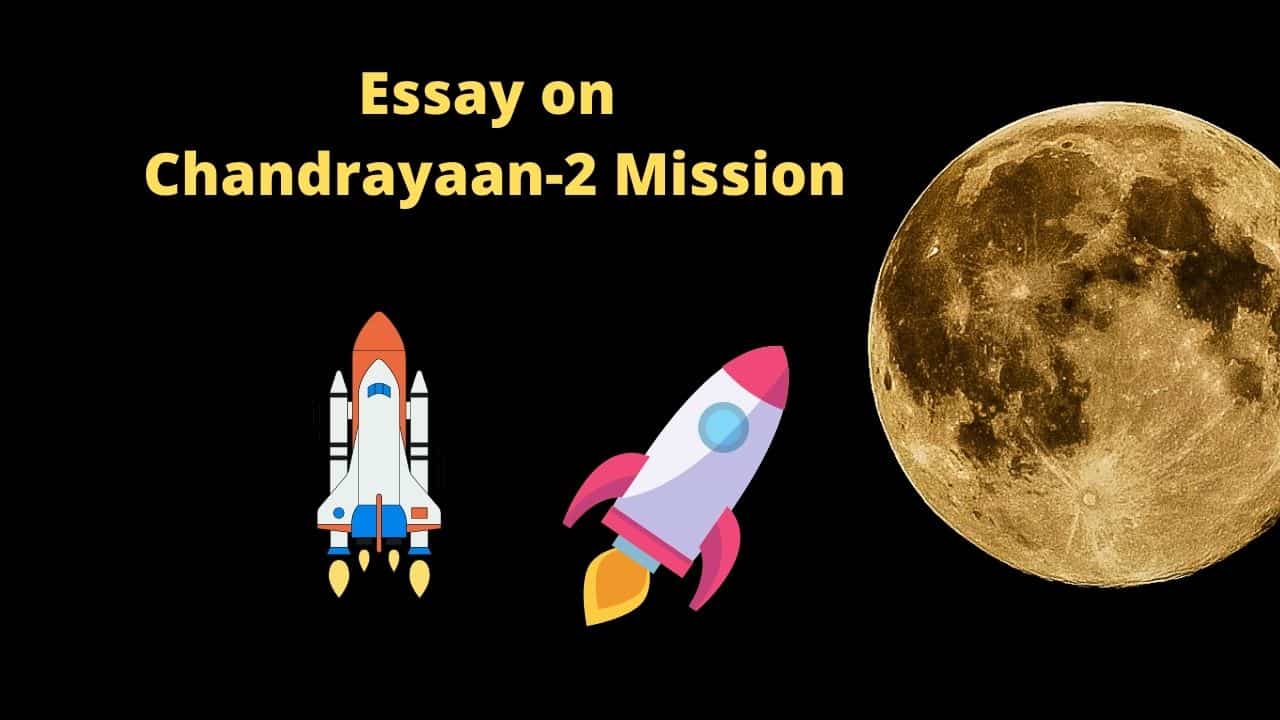 Essay on Chandrayaan 2 Mission: India’s space mission seeks to use space technology for national development. In this regard, India’s space program took a big leap when the Chandrayaan-2 mission was undertaken in an attempt to land on the lunar surface.

Chandrayaan-2, a follow-up mission to Chandrayaan-1, was launched in October 2008 and orbited around the Moon for 312 days till August 2009. This led to the discovery of water in the form of ice in different parts of the Moon, an unprecedented discovery in the world of space science. It also discovered minerals such as magnesium, aluminum, and silicon on the lunar surface.

The Chandraya-2 mission is a highly complex mission, representing a significant technological leap in comparison to ISRO’s previous missions. It included an orbiter, lander, and rover to explore the unexplored South Pole of the Moon.

The mission is designed to expand lunar scientific knowledge through detailed studies of topography, seismology, mineral identification and distribution, surface chemical composition, thermo-physical characteristics of topsoils, and the composition of the weak lunar atmosphere,  leading to a new understanding of the origin and evolution of the Moon.

The Chandrayaan-2 Mission has launched on 22 July 2019 at 2:43 PM IST by Geosynchronous Satellite Launch Vehicle Mark III (GSLV Mk III) on its course to the Moon from the second launch pad of the Satish Dhawan Space Center. The craft reached lunar orbit on 20 August 2019 and began orbital positioning maneuvers for the landing of Vikram Lander.

Vikram and the rover were scheduled to land on the near side of the Moon in the south polar region at approximately 1:50 AM on 7 September 2019 at a latitude of about 70° south and conduct scientific experiments for one lunar day.

However, the lander deviated from its intended trajectory starting at 2.1 kilometers (1.3 mi) altitude, and communication was lost when touchdown confirmation was expected. ISRO chairman K. Sivan has confirmed initial reports suggesting an accident, stating that the location of the lander had been found, and that “it must have been a hard landing”.

The orbiter weighing 2379 kg will orbit the moon for one year. It has eight payloads, which will carry out different experiments. This orbiter will be able to communicate with the Indian Deep Space Network based in Bangalore. Apart from this, it will also be in contact with the lander. This orbiter is capable of generating a thousand watts of electricity from the sun’s rays. It will do the work of sending information to the earth.

The Vikram lander had to separate from the orbiter and descend into a low lunar orbit of 30 km x 100 km using its main engines. It was to then perform a  comprehensive check of all its onboard systems before attempting a soft landing that would have deployed the rover and enabled it to perform scientific activities for approximately 14 Earth days. It had the capability to communicate with Earth as well as with the orbiter & rover.

It had all the equipment to select a suitable landing site and slow down its speed to enable a soft landing. However, this failed to slow down the Pragyaan rover sufficiently to enable it to complete its task of exploring the lunar surface. The lander had a power generation capacity of 650 watts and a weight of 1471 kg, including a rover weighing 27 kg.

The name Rover Pragyan is derived from Sanskrit, which means knowledge. Weighing 27 kg, this rover has two payloads. It is a robotic vehicle with six wheels. Through the payloads engaged in Lander Vikram and Rover Pragyan, the surface of the Moon was to study thermal physics, earthquakes, element composition of the soil, etc., but due to the loss of contact with Lander Vikram, the situation is still not clear in this context.

The objective of the Chandrayaan-2 Mission

The primary objective of the Chandrayaan-2 lander was to demonstrate the ability to soft-land on the lunar surface and operate a robotic rover on the surface. Scientific goals include orbital studies of lunar topography, mineralogy, elemental abundance, lunar exosphere, and signatures of hydroxyl and water ice. The orbiter will map the lunar surface and help in preparing its 3D map. The onboard radar will also map the surface by studying the water ice in the south polar region and the thickness of the lunar regolith on the surface.

Chandrayaan mission also has economic benefits, through this India has demonstrated cheap technology and efficient technology. This will increase India’s stature in the space market and due to cheap services, India will become a major favorite country for space trade. Will also search for a large number of minerals on the Moon, the most important of which is Helium-3. In this way, if there is a possibility of space mining in the future, then India will be in a position of great advantage.

Along with the economic benefits, the Chandrayaan mission also has political significance. India’s stature has increased with this mission. If there is any kind of agreement regarding the right to space in the future, then India will be in the form of a major leader and policymaker. At the same time, India’s space proficiency will strengthen India in the event of future space militarization.

Importance of Chandrayaan-2 Mission for India

Even though the mission has not fulfilled all its stated objectives, it has enhanced the national pride of India. It will motivate the youth to develop scientific temper and adopt real-life applications of science and technology. The mission is to improve the understanding of the Moon and benefit India as well as the entire humanity.

It will also promote indigenously developed space technology which will be critical for future launches and technology missions. It is important to inculcate the spirit of scientific temper, innovation, and high standards of manufacturing in India’s space sector. ISRO’s partnership with Indian startups in the space sector such as ‘Team Indus’ will also nurture space startups in India.

The Chandrayaan-2 Mission was launched aboard the Geosynchronous Satellite Launch Vehicle Mark III (GSLV Mk III) with an estimated lift-off mass of 3,850 kg (8,490 lb) from the Satish Dhawan Space Center on Sriharikota Island. As of June 2019, the allocated cost of the mission is ₹978 crore which includes ₹603 crores for the space segment and ₹375 crores as launch cost on GSLV Mk III. The Chandrayaan-2 stack was initially placed in an Earth parking orbit of 170 km perigee and 40,400 km apogee by the launch vehicle.

The orbiter is successfully orbiting the Moon in its designated orbit. It is continuously transmitting data in the form of images to ISRO ground stations through various onboard sensors and cameras. On July 30, 2020, the Terrain Mapping Camera captures the Sarabhai Crater on the Moon’s northeast quadrant.

“Even after the crash of the lander and the rover, the Chandrayaan-2 mission can be said to be 95% successful as the orbiter part is intact and doing its job perfectly,” says K Sivan, Chairman, ISRO. It is true that we have reached the moon again with Chandrayaan-2.

Further lunar missions are planned by ISRO, with another attempt at soft landing with Chandrayaan-3 by 2021. The proposed configuration would include a detachable propulsion module, a lander, and a rover, but not an orbiter. We hope that this time ISRO will get 100 percent success in the mission.

If you want to ask any queries regarding the Essay on Chandrayaan 2 Mission then message us in the comment section, and we will reply to you soon. For More Updates Join Our Telegram Channel and Click here for More Educational News