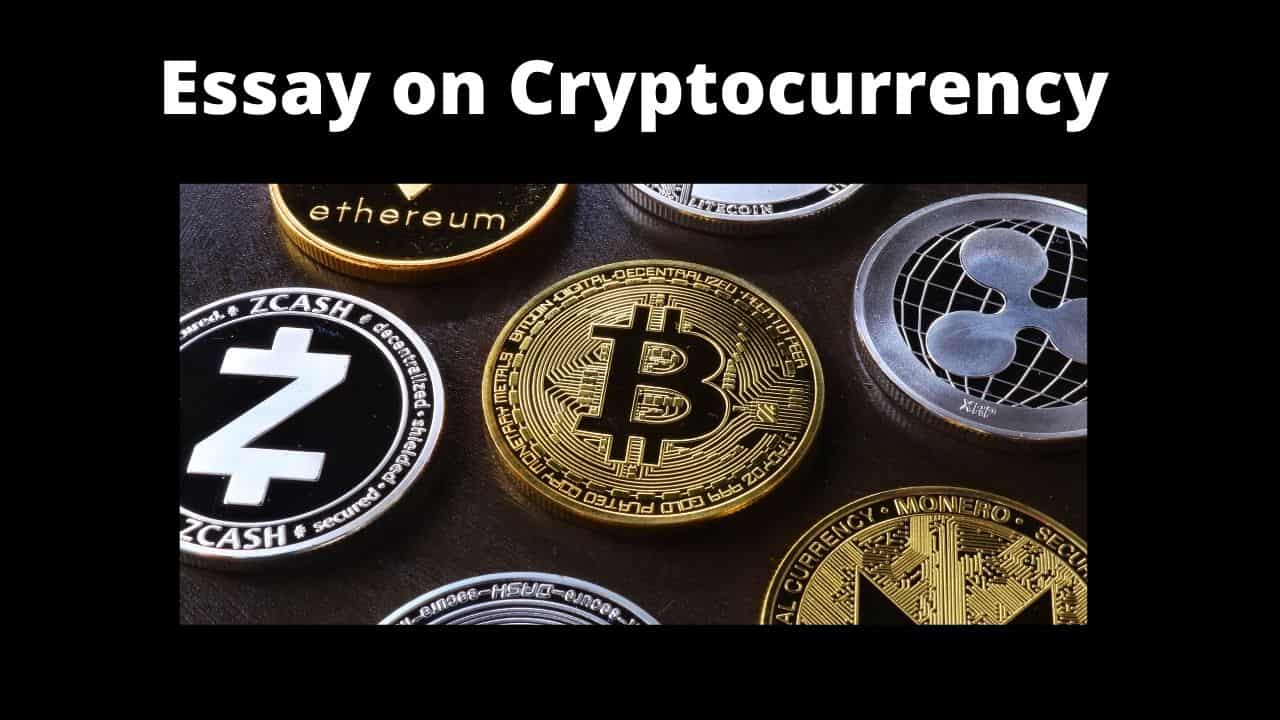 Today, we discuss an important topic about Essay on Cryptocurrency in English for Students and Children. In this article, there are written two different types of essays regarding Cryptocurrency. The first essay is a long essay on cryptocurrency in India of 1000 words.

This long Essay on Cryptocurrency in English is suitable for students of classes  9 and 10, 11, 12, and also for competitive exam aspirants (SSC CGL CHSL MTS and UPSC Exam).

The second is a short essay on Cryptocurrency in English of 500 words. These are suitable for students and children of classes 3, 4, 5, 6,7,8.

Essay on Cryptocurrency in English 1000 Words

The term “cryptocurrency” is derived from the encryption technology that is used to secure the network.

A cryptocurrency is a form of payment that can be exchanged for goods and services online. Many companies issue their own currencies, often called tokens, and can be traded exclusively for a good or service provided by the company.

A cryptocurrency is a digital or virtual currency that is secured by cryptography, making it nearly impossible to counterfeit or double spend. Many cryptocurrencies are decentralized networks that have a distributed ledger implemented by a separate network of computers based on blockchain technology.

A defining characteristic of cryptocurrencies is that they are generally not issued by any central authority, which makes them theoretically immune from government interference or manipulation.

Cryptocurrency is a type of currency that’s digital and decentralized. Cryptocurrencies can be used to buy and sell things, and their potential to store and grow value has also caught the eye of many investors. 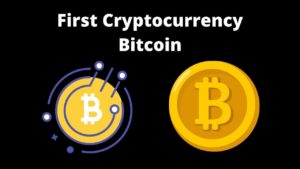 Each of these currencies serves different purposes, with some optimized for use in place of cash, and others designed for private, direct transactions.

How does Cryptocurrency Work?

Transactions are sent between peers using software known as cryptocurrency wallets (for storing, sending, and receiving digital currency). The person doing the transaction uses the wallet software to transfer funds from one account to another. To transfer funds, it is necessary to know the password associated with the account. Transactions made between peers are encrypted and then transmitted over a network of cryptocurrencies.

Cryptocurrencies are digital and therefore cannot be counterfeited or arbitrarily reversed by the sender. Cryptocurrency uses a ‘push’ mechanism that allows the cryptocurrency holder to send exactly what he/she wants to the merchant or recipient without any information. Decentralization is one of the main advantages of cryptocurrency as it is managed by its own network and not by any central authority.

Cryptocurrencies are gaining popularity because they offer privacy protection, cost-effectiveness, low entry barriers that can be used as an alternative to banking systems and fiat currencies, open-source methodologies and public participation, and also immunity to government-led financial retaliation. Every transaction is transparent, autonomous, and secure.

Since the cryptocurrency is not bound by the exchange rates, transaction fees, or other charges of any country and hence it can be used internationally without any problems. Being paperless, it is eco-friendly. Anonymity is one of the biggest benefits provided by the cryptocurrency as one does not need to reveal their identity. Because of these benefits, cryptocurrency started gaining acceptance around the world.

Facebook has officially launched its virtual currency named ‘Libra’. It will be governed by the Libra Association, a Swiss group consisting of 28 members. It will run on a blockchain on which cryptocurrency payments take place.

Cryptocurrencies have their own associated risks. Most people have no idea how to use cryptocurrencies and hence are vulnerable to hacking. Cryptocurrencies are highly volatile in nature. The central issues are the lack of funds, which means there is no legal formal entity to give guarantees in any bankruptcy case.

There is no way to get a refund of the amount paid by someone by mistake. If a person has stored digital currency in his phone or computer, it is better to remember the password and not lose these devices. Losing your coin means that no one will be able to retrieve it.

Cryptocurrencies are being condemned in many countries due to their use in gray and black markets. There are two sets of interconnected risks, one for the development and expansion of these platforms in an uncertain policy environment and the other that these platforms pose a risk to the security of users and the state. They also have potential uses for illegal trade and criminal activities and can be used to finance terrorism.

Position of India in Cryptocurrency

India plays a relatively minor role in the global cryptocurrency market as it holds only 2% of the global cryptocurrency market capitalization. The Reserve Bank of India is monitoring the growing use of cryptocurrencies and issued an advisory in this regard in 2013, cautioning users, holders, and traders of virtual currencies about their potential financial, legal, and security risks. The Ministry of Finance also held a public consultation on regulating virtual currencies in May 2017. 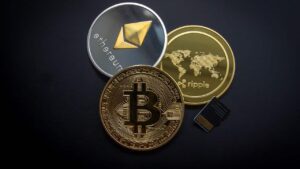 In March 2020, the Supreme Court of India declared the RBI notification of April 2018, which had banned transactions through virtual currencies, as unconstitutional. This could lead to an increase in the use of cryptocurrencies in India.

If authorized as an electronic payment system or designated a legal instrument, cryptocurrencies will come under the purview of the RBI; Capital gains and business transactions would be liable to tax, and foreign payments would also come under the purview of the Foreign Exchange Management Act. Regulated cryptocurrencies will ensure strong consumer protection provisions.

The acceptability of cryptocurrencies as a legal instrument currently varies from country to country. While some laws and measures are in the process of being formulated, others are yet to respond to this disruptive change. Some countries like Algeria, Bolivia, Egypt, etc. have completely banned cryptocurrencies.

In other 15 countries like Bahrain, Bangladesh, China, etc an ‘implicit ban’ has been implemented. The Bank of Thailand announced plans to create its own cryptocurrency. UNICEF accepts cryptocurrency donations.

The UK and Australia continue to work on the formalities while China has recently banned Initial Coin Offerings (ICOs) for various reasons including various ICO scams around the world.

The increasing use of cryptocurrencies in terrorism financing, ransomware, illegal drug or weapons trade, and cybercrime have also raised red flags among security and law enforcement agencies. They may have the potential to displace existing financial systems that enable the electronic flow of money across different political boundaries.

Cryptocurrencies face criticism for a number of reasons, including their use for illegal activities, exchange rate volatility, and vulnerabilities of the infrastructure underlying them. However, they also have been praised for their portability, divisibility, inflation resistance, and transparency.

Due to this volatile and nascent stage of cryptocurrency and the low realization of its value due to limited use, it has been speculated that while the people of India are eager and eager for transparent, quick, and high return currencies but the  Indian Government has its own stand that believes in knowing and exploring more about the cryptocurrency.

Essay on Cryptocurrency in English 500 Words

This is a short essay on Cryptocurrency in English 500 words. These are beneficial for students and children of classes 3, 4, 5, 6,7,8.

A cryptocurrency is a digital asset designed to serve as a medium of exchange that uses cryptography to secure its transactions, control the creation of additional units, and verify the transfer of assets.

A cryptocurrency is a form of digital asset based on a network that is distributed across a large number of computers. This decentralized structure allows them to exist outside the control of the government and central authorities.

Cryptocurrencies work using a technology known as the blockchain. Blockchain is a decentralized technology spread across multiple computers that manage and record transactions. Part of the appeal of this blockchain technology is its security. Technology has changed the way people work, communicate, shop, and even pay for goods.

The future appeal of cryptocurrencies lies in allowing fast, secure global transactions and our ultimate control over our money with lower transaction fees than all current currencies. But given the risks posed by the potential use of cryptocurrencies in terrorism financing, money laundering, and tax evasion, the government will have to take considerable action.

If you want to ask any queries regarding the Essay on Cryptocurrency in English then message us in the comment section, and we will reply to you soon. For More Updates Join Our Telegram Channel and Click here for More Educational News