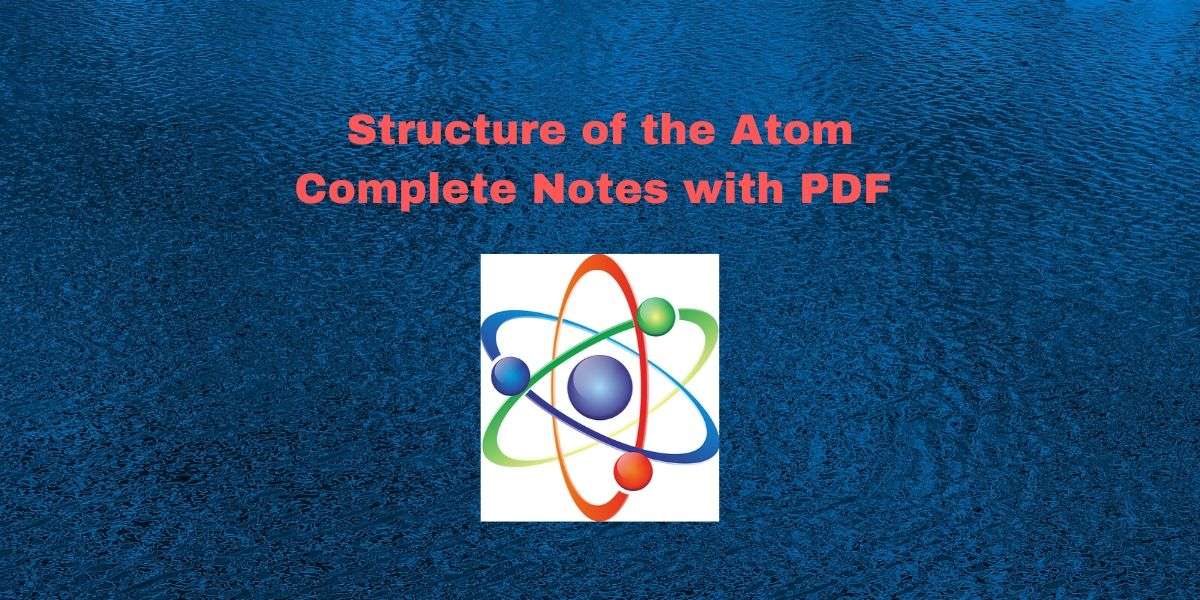 Structure of the atom for Class 9 Notes

Similarly, if we rubbed a comb in dry hair, then this comb attracts small pieces of paper. The electric charge produced on the comb on rubbing in hair comes from the atoms found in the comb.

The existence of electrons in an atom was discovered by J.J Thomson in 1897. When Thomson passed electricity at high voltage through gas at very low pressure taken in a discharge tube. Stream of minute particles was given out by the cathode (negative electrode). The steam of the cathode ray in the gas discharge tube consists of negatively charged particles called electrons. Atoms that contain negatively charged particles are called electrons.

The existence of protons in the atoms was discovered by E. Goldstein / Rutherford.

The existence of neutrons in atoms was discovered by James Chadwick in 1932. The neutron is a neutral particle present in the nucleus of an atom. Atoms of all the elements contain neutrons except hydrogen atom which does not contain any neutron. A neutron is a subatomic particle that is not found in hydrogen. A hydrogen atom contains only one proton and one neutron.

Three important models of the Structure of the atom

THOMSON’S MODEL OF THE ATOM

The total negative charge of electrons is equal to the total positive charge of the watermelon. These equal and opposite charges balance each other due to which an atom becomes electrically neutral on the whole.

Gold foil is a very thin sheet of gold metal. Such a gold foil was used in Rutherford’s alpha particles scattering experiment which led to the discovery of the nucleus.

Rutherford’s model of the atom

Rutherford’s model is also called nuclear atom or planetary model of the atom, description of the structure of atoms proposed by Ernest Rutherford.

Bohr’s Model of the Atom

A Danish physicist named Neil Bohr in 1913 proposed the Bohr atomic model. He modified the problems and drawbacks associated with Rutherford’s model of an atom. Bohr’s model of the atom can be described as follows:

Mass number = No. of protons + No. of neutrons

Arrangement of Electrons in the atoms

4th energy level is called the N shell, and so on.

The maximum number of electrons in first energy level = 2n2

The maximum number of electrons in 2nd energy level = 2n2

The maximum number of electrons in 3rd energy level = 2n2

The maximum number of electrons in fourth energy level = 2n2

The arrangement of electrons in the various shells of an atom of the element is called electronic configuration. The maximum electrons which can be accommodated in the K shell are 2, for the L shell is 8, for the M shell is 18 and for the N shell is 32.

Cause of Chemical Combination

The capacity of an atom of an element to form chemical bonds is known as its valency. It is decided by the number of valence electrons in its atom.

There are two types of valency:

The number of electrons lost or gained by one atom of the element to achieve the nearest inert gas electron configuration is called its electrovalency.

The number of electrons shared by one atom of an element to achieve the nearest inert gas electron configuration is called covalency.

Different Between Isotopes and Isobars

Isobars are the atoms of different elements having different atomic numbers but the same mass number. Isobars have a different number of protons in their nuclei but the total number of nucleons in them is the same.