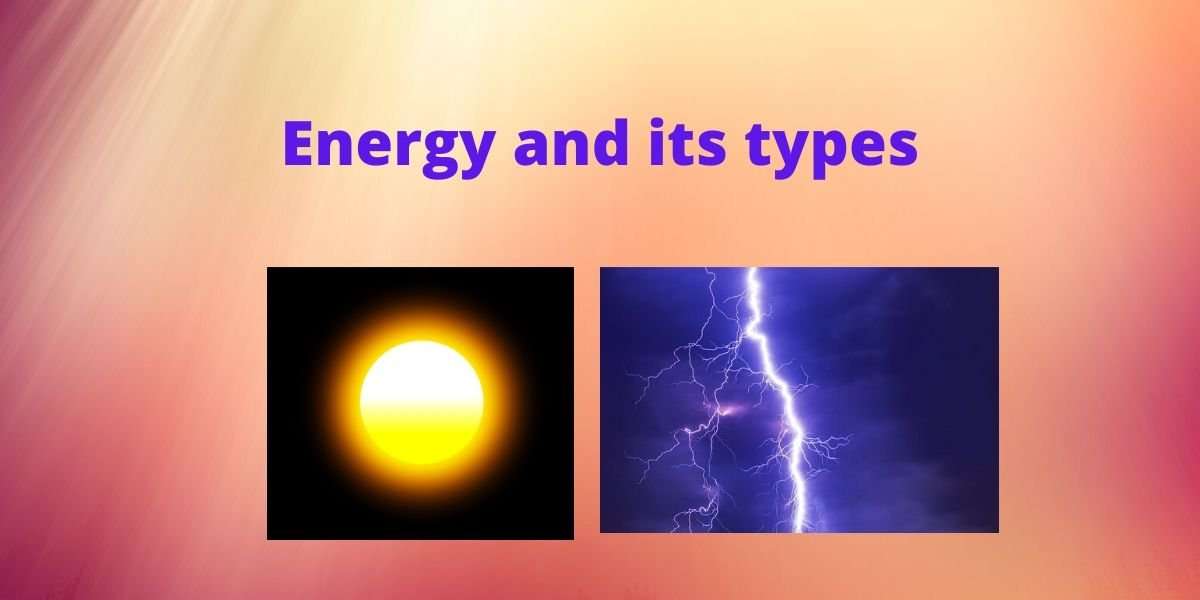 It can be defined as the capacity for doing work. The energy of a moving object is known as kinetic energy. When an object of mass m, moving with a velocity of magnitude v, this energy can be calculated from the formula. Energy has several forms; Mechanical, Sound, heat, chemical, atomic, electric, etc. Now a detailed explanation of Types of energy

What is Kinetic Energy?

What is Potential Energy? It’s the energy released in nuclear reactions. When a neutron splits the nucleus of an atom into smaller pieces, it is called fission. This is the source of energy in nuclear plants. When two nuclei are joined together under fusion, millions of degrees of joules of heat energy are released such as in stars like the sun. In both cases, fusion or fission, some of the matter making up the nuclear is actually converted into energy, matter itself is a form of energy. This concept involves one of the most famous formulas in physics, the formula. The formula was discovered by Einstein as part of his “Theory of Special Relativity”. In simple words, it means that the energy intrinsically stored in a piece of matter at rest equals it mass times the speed of light squared.

All matter is made up of atoms, and each atom is further made up of protons, neutrons, and electrons. Electrons orbit around the center, or nucleus, of atoms while neutrons and protons present in the center make up the nucleus.

Some materials, particularly metals, have some electrons loosely attached to their nucleus in the center. They can easily be made to move from one atom to another if an electric field or voltage is applied to them. When these electrons move among the atoms of matter, a current of electricity is created. The electrons pass from atom to atom, pushed by an electric field and by each other (They repel each other because like charges repel), thus creating the electrical current, i.e. the electrical energy is really transferred by the chain of repulsive interactions between the electrons down the conductor – not by the transfer of electrons per sec and as the electrons move through a “resister” in the circuit, they interact with the atoms in the resister very strongly, causing the resistor to heat up, hence, delivering energy in the form of heat too. (Joule’s law of heating) The measure of how well something conducts electricity is called its conductivity, and the reciprocal of conductivity is called the resistance.

The generation or use of electric power over a period of time is expressed in kilowatt-hours (kWh), 1 kWh = 3.6 ×J, megawatt-hours (MWh), or gigawatt-hours (GWh).

It is a form of potential energy related to the breaking and forming of chemical bonds. It is stored in food, fuels, and batteries, and is released as the other forms of energy during chemicals reactions. It is really a form of microscopic potential energy, which exists because of the electric and magnetic forces of attraction exerted between the different parts of each molecule, the same attractive forces involved in thermal vibrations. These parts get rearranged in chemical reactions, releasing or adding to this potential energy.

Consider energy stored in a battery, which is in the form of chemical energy such as in a dry cell or storage battery. But as electricity is also involved, the battery is supposed to store energy “electron-chemical device is a “fuel- cell” that uses water as the chemical source of energy of the production of hydrogen as a fuel.

Assume the energy transmitted to the Earth from the sun by light (or by any source of light). Light is also called “electromagnetic radiation”. Light is considered as the little packets of energy called photons (that is, as particles, instead of waves). The word “photon” has been derived from the word “photo” which means “light”. Photons are created if electrons jump to lower energy levels in atoms, and are absorbed when electrons jump to higher levels. Photons are also created when a charged particle, such as an electron or a proton, is accelerated, as for example happens in a radio transmitter antenna.

Sound waves are compression waves associated with the potential and kinetic energy of air molecules. When an object moves quickly (for example, the head of a drum) it compresses the air nearby, giving that air potential energy. That air then expands, transforming potential energy into kinetic energy (moving air). The moving air then pushes on and compresses other air, and so on down the chain leading to the propagation of energy called sound energy.

A body possesses heat energy due to the random motion of its molecules. Heat energy is also related to the internal energy of the body.

In 1905, Albert Einstein discovered that mass can be converted into energy and vice-versa, he showed that mass and energy are equivalent and related by the relation

Principle of Conservation of Energy

Law of conservation of Energy

It states, in a closed system, i.e. a system that is isolated from its surroundings, the total energy of the system is conserved.

Read the above Notes and Solve the below question

2. What are energy and its types?

4. What is the best definition of energy?