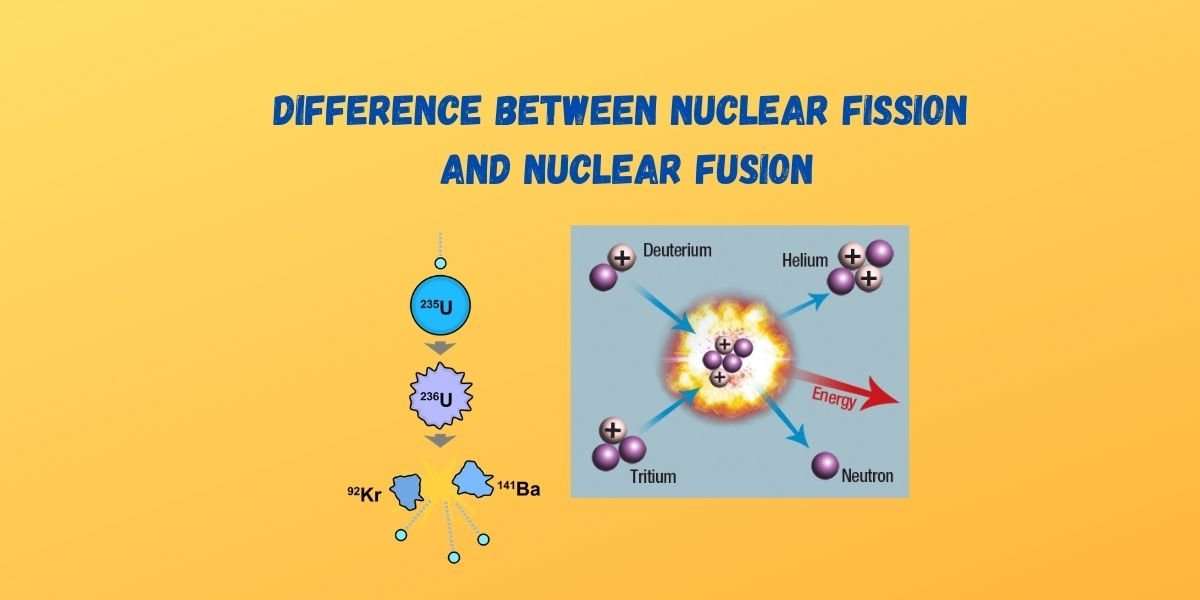 Let’s start with a detailed explanation of the Difference between Nuclear fission and Nuclear fusion.

Nuclear Energy is produced by the conversion of a small amount of the mass of the nucleus of an atom into energy. The amount of energy released in nuclear fission is equivalent to the energy content of over three million metric tons of coal. Heavy atoms such as uranium or plutonium can be split by bombarding them with the neutron. Fission Reaction of U235

Some other 92U235 fission reactions are:

The aspect of energy and mass in nuclear fission

The energy and mass aspects of the fission reaction:

It is a device in which nuclear fission can be carried out through a sustained and controlled chain reaction.

The nuclear reactor involves the splitting of the nucleus of uranium-235 when it is struck by a neutron. The uranium-235 first absorbs the neutron to yield uranium-236, and most of these U-236 nuclei split into two fission fragments. Fission reaction releases two to four neutrons. One of these neutrons triggers another fission for a sustained chain reaction.

Uranium-236 nucleus does not split evenly into equal fission fragments. Rather, the tendency, especially with fission induced by thermal neutrons, is for one fragment to be considerably lighter than the other.

The chain reaction once started will remain regular, accelerate, or retard depending upon, a factor called neutron reproduction factor (k).

In nuclear fusion, two or more than 2 lighter nuclei combine to form a single heavy nucleus. The mass of the single nucleus so formed is less than the sum of the masses of parent nuclei.

The difference in mass results in the release of a tremendous amount of energy.

Fission bombs was known as the primary produces a flood of radiation including a large number of neutrons. This radiation impinges on the thermonuclear portion of the bomb, called the secondary. The secondary consists largely of lithium deuteride. The neutrons react with the lithium in this chemical compound, producing helium & tritium.

I hope you like this article “Difference between Nuclear fission and Nuclear fusion”.