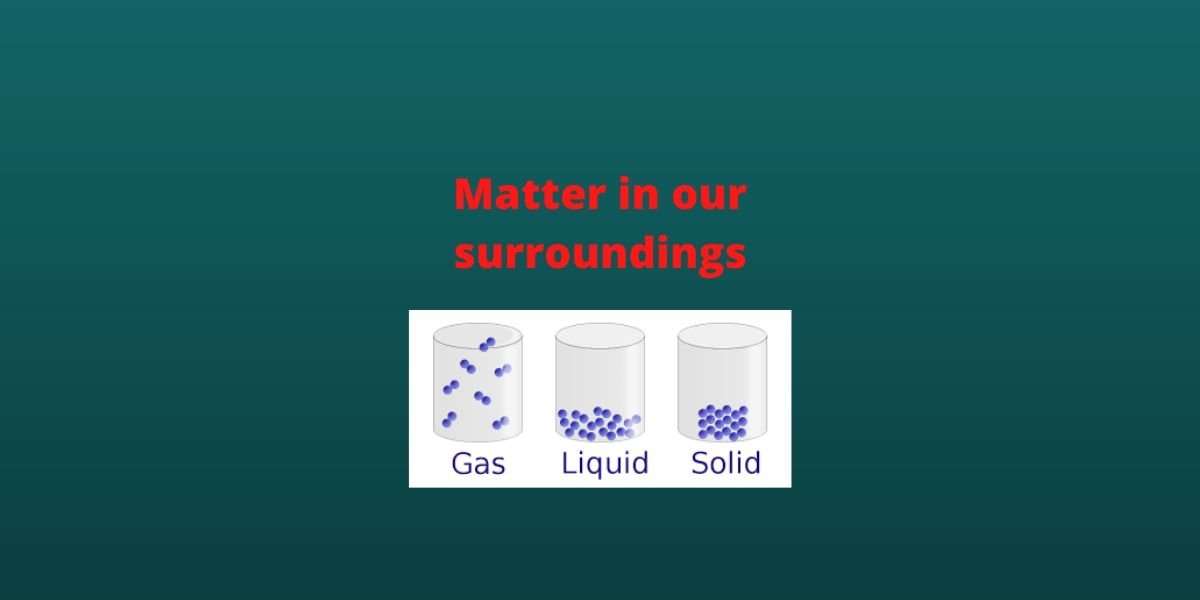 Matter in our surroundings

Matter: Anything that occupies space and has some mass is called matter. It exists in the form of five basic elements, the Panch tatva – air, earth, fire, sky, and water (Vayu, Prithvi, Agni, Akash, and jal).

The matter is made of particles: Everything around us is made of tiny pieces or particles. Example: A small raindrop contains about 1021 particles of water.

Evidence for particles in the matter: The random motion of small particles suspended in a gas or liquid is called Brownian motion. The existence of Brownian motion gives us two conclusions about the nature of matter:

Characteristics of particles of matter:

Diffusion: Intermixing of particles of two different types of matter on their own is called diffusion.

Brownian motion: The random or zig-zag movement of microscopic particles in a fluid, as a result of continuous bombardment from molecules of the surrounding medium, is called Brownian motion.

Ex: When we light an incense stick in one corner of a room, its fragrance spreads in the whole room quickly.

Classification of the matter: All the matter can be classified into groups:

Solids: In solids, the particles are closely packed. It is a rigid form of matter. Rigid means are unbending or inflexible.

Liquids: Constituent particles are less closely packed. Kinetic energy between the particles is more than that in solids.

Gases: Constituent particles are far apart from each other. Particles of gases have maximum kinetic energy.

SI and Common unit of temperature:

Convert a temperature on Fahrenheit scale to Celsius scale:

Convert a temperature on Celsius scale to Fahrenheit scale:

Convert a temperature on Celsius scale to Fahrenheit scale:

Change of state of matter:

Physical states of matter can be interconverted into each other by following two ways:

1. By changing the temperature

2. By changing the pressure

Effect of change of temperature

Melting: The process in which a solid substance changes into a liquid on heating, is known as melting. Melting is also called fusion.

Melting point: The temperature at which solid melts to become a liquid at the atmospheric pressure is known as its melting point.

The melting point of ice is 0 degrees Celsius.

The melting point of iron is 1535 degrees Celsius.

The boiling point of water is 100 degrees Celsius.

The boiling point of alcohol is 78 degrees Celsius.

Gas to liquid change: On cooling a gas like steam (or water vapor), the kinetic energy of its particles is lowered down, causing them to move slowly and bringing them closer, forming a liquid.

Condensation: The process of changing a gas (or vapor) to a liquid by cooling is known as condensation.

Liquid to solid change: When a liquid is cooled down by lowering its temperature, its particles lose the kinetic energy and come to a stationary position, causing the liquid to turn to solid.

Freezing: The process of changing a liquid into a solid by cooling is known as freezing. Freezing means solidification.

Freezing point: The temperature at which the state of substance changes from a liquid to a solid is called the freezing point of that substance.

Latent heat: The heat energy which has to be supplied to change the state of a substance is known as its latent heat.

Sublimation: The changing of a solid directly into vapors on heating and of vapors into solid on cooling is called sublimation.

The common substances which undergo sublimation are Iodine, camphor, naphthalene, and ammonium chloride.

Effect of change of pressure

Evaporation: The process of a liquid changing into vapor even below its boiling point is called evaporation.

Factors affecting the rate of evaporation

Surface area: The rate of evaporation increases by increasing the surface area of the liquid.

The humidity of air: Decrease the humidity increases the rate of evaporation.

Temperature: The rate of evaporation increases by increasing the temperature of the liquid.

Wind speed: The rate of change of a liquid increased with increasing wind speed.

Cooling caused by evaporation: Evaporation causes cooling because the process requires heat energy. The energy is taken away by the molecules when they convert from liquid to gas, and this causes cooling on the original surface.

To get more of such useful articles for the preparation of CBSE of class 9 Annual exam 2021, click here