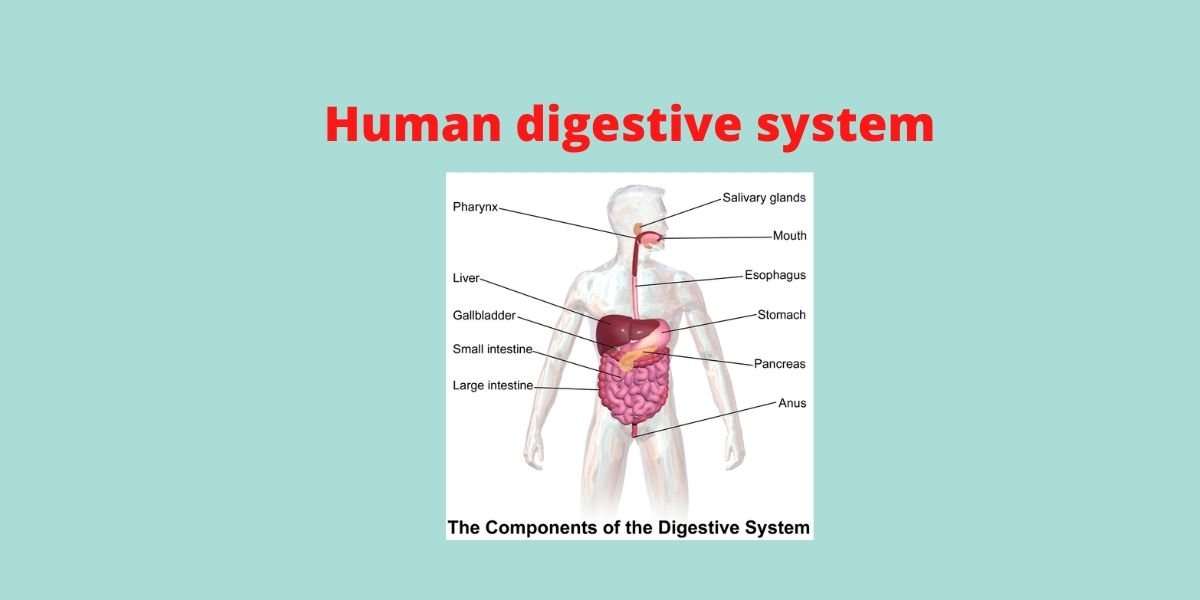 The human digestive system with diagram

The breakdown of large particles into small particles with the help of the enzyme is called digestion. The organs which are responsible for ingestion, digestion, absorption, assimilation, and egestion constitute the digestive system. The digestive system comprises the alimentary canal and associated digestive glands. The alimentary canal consists of the following parts:

The main organ of the human digestive system

The digestion system started with the mouth. The mouth leads into the buccal cavity. The floor of the buccal cavity has tongue-bearing taste buds (sweet, salt, sour & bitter). Man possesses teeth on both jaws. There are 32 teeth of four different types, namely incisors, canines, premolars, and molars.

It is a long, narrow, muscular tube that leads to the stomach. It is called a food pipe. The Length of the food pipe is 25 cm.

It lies below the diaphragm on the left side of the abdominal cavity and is J-shaped. The food is stored and partly digested in the stomach. Gastric gland present in the stomach.

The length of the large intestine is 1-1.25 meters. It is much shorter and wider than the small intestine and is differentiated into three regions, the caecum, which is a small rounded blind sac from which the vermiform appendix arises; the colon is the inverted U-shaped tube and the rectum opens to the exterior through the anus. Waste food excretes our body by the anus.

Digestive Glands. Various glands associated with the alimentary canal are:

Salivary Glands. The salivary glands secrete the first of the digestive juices, the saliva. There are three pairs of salivary glands namely the parotids (largest salivary gland, lie on sides of the face) sub-maxillary (lie at angles of the lower jaw), and sublingual glands (under the front part of teeth).

Gastric Glands. They are branched tubular glands that lie in the mucus membranes of the stomach. They secrete gastric juice, which is clear, acidic containing HCI, enzymes, and mucus.

It is the largest gland in man and lies below the diaphragm in the right upper part of the abdomen. The liver comprises or two lobes right and left, where the right lobe is much larger than the left lobe. The cells of the liver, i.e., hepatic cells produce bile juice which flows out of the liver through hepatic ducts forming the common bile duct and opens into the duodenum. Bile juice then flows into the gall bladder through the cystic ducts.

It is a soft lobulated gland present in between the loops of the duodenum. It secrets pancreatic juice containing enzymes that are poured into the duodenum with the help of the pancreatic duct.

2 thoughts on “Digestive System with Diagram, Parts, and Function”