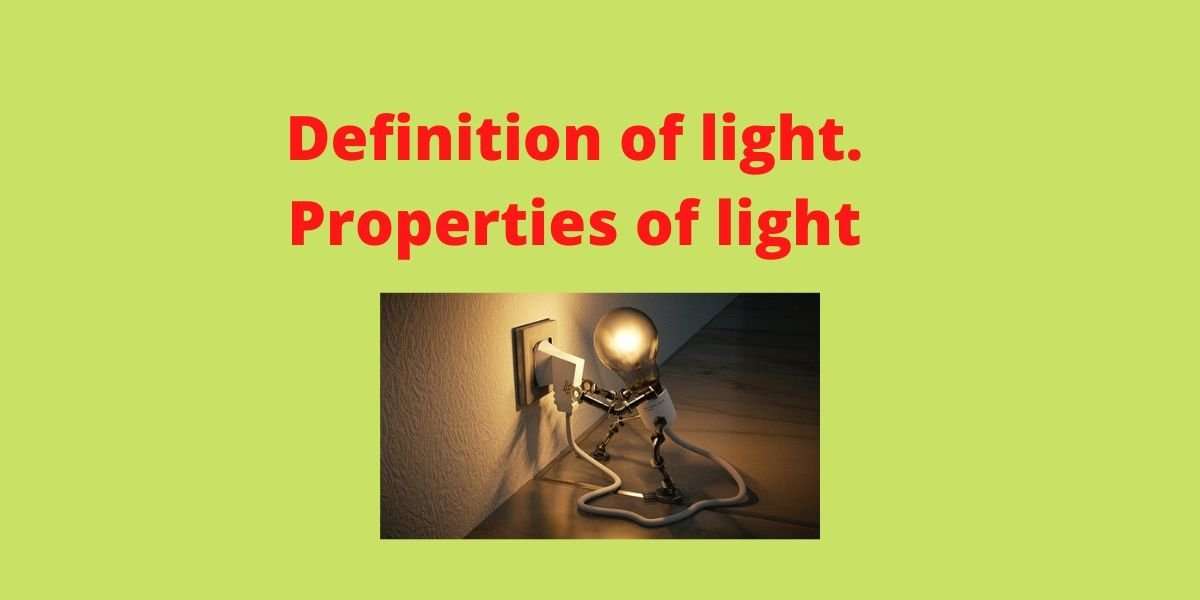 Let’s start the Definition of light

Definition of light- Light is the source of energy that gives us a sensation of vision. The object has broadly been classified as luminous (light-emitting) and non-luminous (non-light emitting). The luminous objects further based on the source and mode of emission of light has further been classified. Electric discharge such as electric spark in internal combustion engines lightning, fluorescent lamps, mercury-vapour lamp, sodium-vapour lamp, etc.

Luminous object: The objects which emit their own light are called luminous objects. An example is Sun, candle lamps etc.

Lightwave travels with a speed of 3 x 108 m/s in free space. Its speed depends on the medium. For example, in water or glass, its speed is considerably less than the speed in air or space. It is transverse in nature and does not require any medium to propagate.

Light has a dual nature or double nature:

It states that light consists of electromagnetic waves which do not require a material medium like solid, liquid or gas for their propagation. The wavelength of visible light is 4 x 10-7 m to 8 x 10-7 m which is very small.

The particle theory of light

It states that light is composed of particles that travel in a straight line at very high speed. Photon is the elementary particles of light.

Light is made up of

For example, the phenomena of interference, diffraction and polarization of light can only be explained if the light is considered to be of a wave nature. On the other hand, the phenomena of reflection and refraction of light and casting of shadows of objects by light can be explained only if the light is thought to be made of particles. Hence, there is evidence for the wave nature of light as well as for the particle nature of light.

These sources of light include black-body radiation, earthquake light, halogen lamp and traditional incandescent light bulb with filament, volcanic eruption and lava released is also an example of the incandescent source of light.

The combustion of fossil fuels such as gaslighting, lanterns, kerosene lamps and oil lamps. The others include Bunsen burner, candle, fire, fireworks, torch and explosive.

Celestial: Nebula and stars, the Milky Way, and a shooting star, sun (sunlight, solar radiation), Aurorae, are the sources of celestial light.

It is the emission of light by a substance not resulting from heat.

It is light resulting from a chemical reaction such as during the oxidation of reactive metals like sodium.

It is the emission of light resulting from the biochemical reaction in a living organism such as in Aequorea Victoria, Antarctic krill, foxfire, glow-worm and electric ray fish.

It is the emission of light resulting from an electric current passed through a substance such as light-emitting diodes(LED) and LASER. (Light Amplification by Stimulated Emission of Radiation)

It is light resulting from absorption of photons, the packet of energy carried by light such as photoelectricity.

It is light from the reemission of absorbed energy when a substance is heated.

According to this law if E is the illuminance, i.e. brightness of surface then

Where θ is the angle of incidence, r is the distance of the screen from source, ‘I’ is luminous intensity. In MKS, the S.I. unit of E is candela/metre2.

Different between Fluorescence and Phosphorescence

Certain substances continue to emit light even after the incident light is cut off. This phenomenon is called phosphorescence.