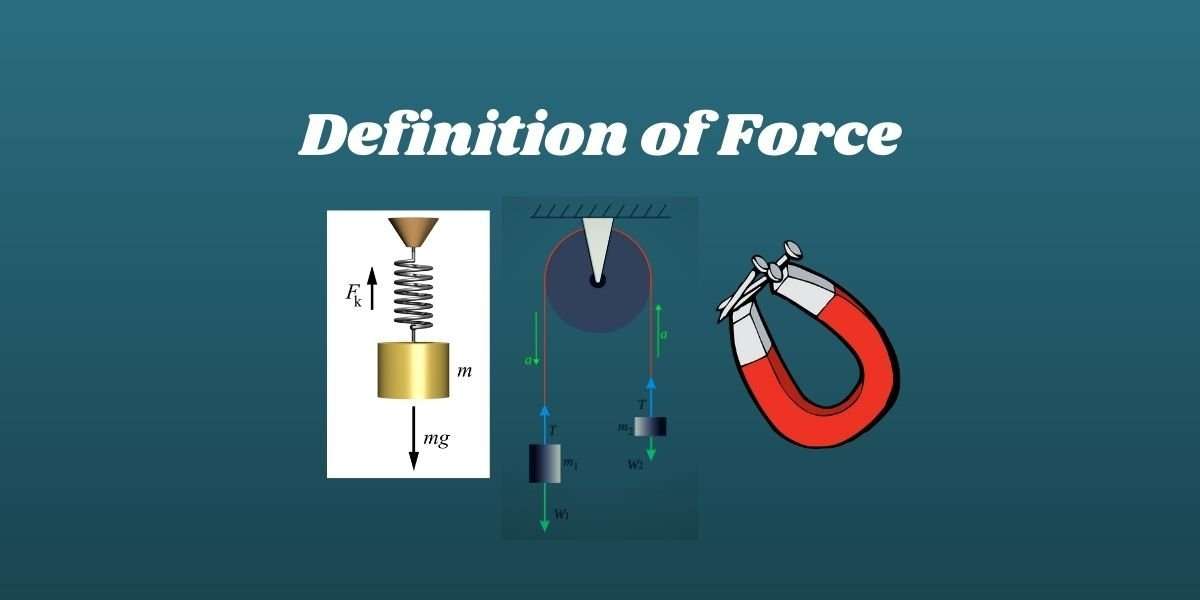 Let’s start with the introduction of “Definition of Force”.  This article will be discussed in detail about definition, formula, unit, and types of force. There are a variety of forces placed into two broad categories on the basis of whether the force has resulted from the contact or non-contact force.

The applied force is a force applied on an object by a person or another object. If a boy pushes a desk across the room or hammers a nail, then there is an applied force acting upon the object.

It is a special type of frictional force that acts upon objects as they travel through the air. The force of air resistance is often observed to oppose the motion of an object.

Air resistance force will frequently be neglected due to its negligible magnitude. It is most noticeable for objects that travel at high speed (like skydiver or a downhill skier) or for an object with large surface areas.

It is the force that is transmitted through a string, rope, cable, or wire when it is pulled tight by forces acting from opposite ends. It is directed along the length of the wire and pulls equally on the objects on the opposite ends of the wire. It is the force exerted by a compressed or stretched spring upon any object that is attached to it. An object that compresses or stretches a spring is always acted upon by the force that restores the object to its rest or equilibrium position. For most springs magnitude of the force is directly proportional to the amount of stretch or compression of the spring.

The normal force is the support force exerted upon an object that is in contact with another stable object. For example, if a notebook is resting upon a surface then the surface is exerting an upward force upon the notebook in order to support the weight of the notebook. On occasion, a normal force is exerted horizontally between two objects that are in contact with each other. For instance, if a boy leans against a wall, the wall pushes horizontally on the boy.

It is the force exerted by a surface as an object moves across it or makes an effort to move across it. Frictional force often opposes the motion of an object.

Gravity is a force of attraction which is exerted on all bodies that have mass. The force exerted on each body by the other through weight is proportional to the mass of the first body times the mass of the second body divided by the square of the distance between them.

A magnet can extract a force on another magnet without being in contact with it. Like poles of 2 magnets repel each other and unlike poles attract each other. Two like charges repel and two unlike charges attract each other, the force between these charges is known as electrostatic force. It mediates all chemical, biological, electrical, and electronic processes. It is the force that causes the interaction between electrically charged particles; the area in which this happens is called electromagnetic fields.

The force acting between nucleons is known as nuclear force. It is the strongest force in nature.

The strong nuclear force is the strongest force in nature. It mediates both nuclear fission and nuclear fusion reactions.

Weak nuclear force mediates the decay of a neutron, in which the neutron decays into a proton and in this process emits a  particle and uncharged particles called a neutrino. As a result of mediating the decay process, the weak nuclear force plays a key role in a supernova. Both these strong and weak forces form an important part of quantum mechanics.

What is Torque or Moment of a Force?

Where,  is the angle between the force and the position vector. The moment of a force or Torque is a vector quantity and its S.I. unit is N-m.

Two equal and opposite forces form a couple and it is defined as the product of the force and the couple arm.

A couple is a vector quantity that appears like torque and its SI unit is N-m. The effect of applying a torque or couple on a body is always to rotate the body because a couple will always have an unbalanced moment about any point or an axis of rotation.